South Africa’s Western Cape has a lot to see and get excited about. Its headlines are usually its wines, whale watching along a pristine coastline, stunning native flora, influential social movements, and the general sun-bathed wonderfulness of the landscape. Cape Town is lively, colourful and packed with things to do, but climbing Table Mountain is one of the things to do first, I’d say. Then there’s Robben Island, the Tenikwa Wildlife Awareness Centre and other animal sanctuaries, and the Kirstenboscåh National Botanical Gardens. Then you might want to head for the coast for a spot of whale watching? Or along the Garden Route for a spot of open-mouthed adulation at some breathtaking, and varied, scenery. Or into the interior to taste some of the region’s most famous exports, its great wines. 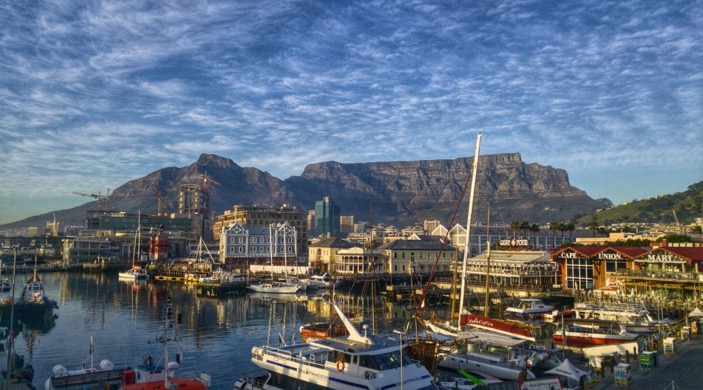 With the spectacular backdrop of Table Mountain in one direction and the glittering expanse of Table Bay in the other, Cape Town has a reputation for being one of the world’s most beautiful cities. It’s both rugged and delicate, rough and pristine, and photogenic as heck. On top of the beauty, the city has a reputation for being laid back, friendly and foodie, and the vineyards just out of the city, the surfing off the golden beaches with their funny penguins, and the lush green botanical gardens are also reasons to visit. 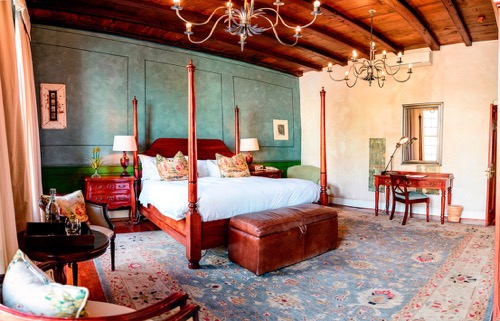 Where to Stay? If you want to be in the heart of things the Cape Heritage Hotel is a very good choice. It’s a townhouse type hotel with just 17 individually designed rooms, and on the roof there’s a decked terrace with a hot tub. The location is right in amongst a buzzing foodie scene, so the breakfasts – served under the shade of a fruit-bearing vine planted in 1771 – are of a very high standard. Yet rooms start from under £100 per night.

Practical Details: Many visitors to South Africa will fly into the Cape Town International Airport, which is just outside the city. You can fly direct from Heathrow in about 11.5 hours, and from the airport you can get into the centre of town on the MyCiti bus, which leaves every 20 minutes, or catch a taxi.

Cape Town is at its best in the summer, the warmest month being February, with a maximum daily average of 26°C. The sea gets to about 21°C too. Cape Town’s weather is pretty mild, though, and even in July, the coldest month, the average daily maximum is 17°C. 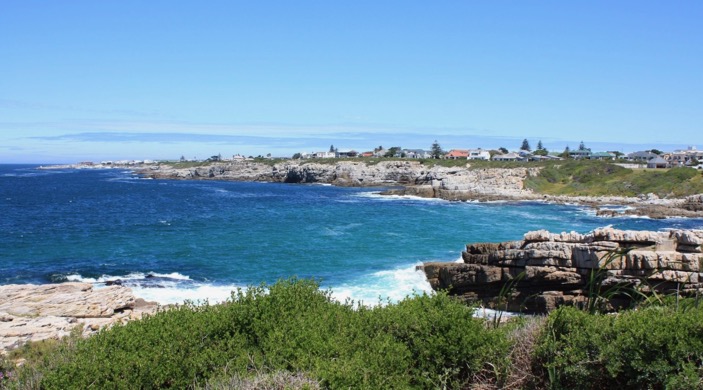 There are plenty of potentially great whale watching spots along the coast of of the Western Cape, with Hermanus probably being the best known – it’s one of the best land-based whale-watching sites in the world. Perched beside glittering white sea cliffs, in the shadow of the Olifantsberg Mountains, Hermanus is also extremely beautiful – what with the whitewashed fishermen’s cottages and lush vineyards. De Hoop is also popular with whales, and Witsand is certainly popular with expectant mother whales, while Gansbaai and De Kelders are where you can see both Great White Sharks and Southern Right Whales. Plettenberg Bay is beautiful as well as a good spot for whale watching, and there’s a colony of Cape Fur Seals too.

However our recommendation is in Paternoster, a charming fishing village grown out of one of the oldest settlements on the Western Cape. The shore here is tinged pink and littered with granite boulders and multicoloured dinghies, and beyond that there’s unspoilt reserve land. The town’s peace and beauty – and proximity to Cape Town – means that it also boasts many of the benefits of the metropolis – the great food and the lively culture. Though with fresh fish in abundance, Paternoster is also renowned for fish & chips, best enjoyed perched high on a dune as you watch dolphins fly through the waters and the heads of lumbering whales float gently above the waves.

Where to Stay? The Strandloper Ocean Boutique Hotel is a collection of 14 secluded suites, all opening out onto the beach at Paternoster – a fantastic whale watching destination. The decor is simple and stylish and the standard of the service and the food is very high. There’s also a great wine cellar. The suites start from around £145 per night.

Practical Details: Paternoster is 145kms from Cape Town, and that’s the closest international airport. The weather here is pretty much the same as Cape Town’s, though with the warmest weather between November and March, when the maximum daily averages are between 23°C and 25°C. Paternoster is also beautiful in July when the wildflowers are in full bloom. 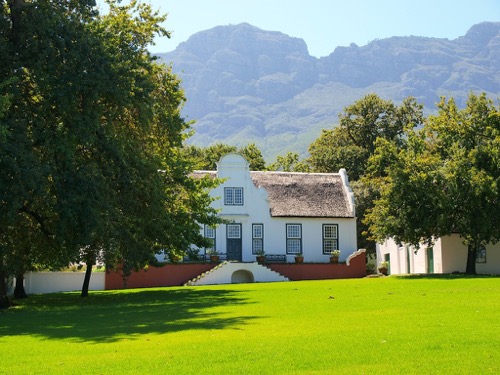 There are two main centres of South African wine making: Franschhoek and Stellenbosch. They’re pretty close together, though, so you don’t have to see one at the expense of the other. Franschhoek is one of South Africa’s oldest settlements, and amongst the beautiful scenery and rustic vineyards there’s plenty of Dutch architecture – though many of the vineyards here actually have French ancestry. The Franschhoek Wine Tram runs through the region, allowing you to see multiple vineyards on a tasting tour.

Stellenbosch is closer to Cape Town. In fact it’s sort of in the suburbs these days, and has a great foodie scene and lively nightlife. But set in amongst stunning mountains and national parks, with vineyards taking up any space in between. Stellenbosch has some great museums too, and quite a bit of its own Dutch architecture. And a bird sanctuary.

Where to Stay? The Basse Provence Country House in Franschhoek is a beautifully converted Cape Dutch style house, dating back to 1855, with magical views of the surrounding vineyards. It boasts seven homely suites and a two bedroomed cottage perfect for families. There’s a beautiful pool with wonderful vineyard views and acres of trails to be walked starting right from the property. And the least expensive rooms start at a very reasonable £61 per night.

Practical Details: Cape Town is the largest major centre to Franschhoek so Cape Town International is still the nearest local airport. And the weather conditions are pretty similar too, with the addition of a warning that the wine regions can get pretty wet during the winter months.

The Western Cape beyond Cape Town

Cape Town is incredible, and the coastline with its whale watching opportunities is epic, and the lush wine region is beautiful, but the Western Cape region offers still more. Robben Island and Table Mountain for example, and the Kirstenboscåh National Botanical Garden, and the Robberg Nature Reserve – which is an incredibly beautiful slice of the earth run through with walking trails along a fantastical coastline, and there’s also the bay of Knysna… the list goes on. 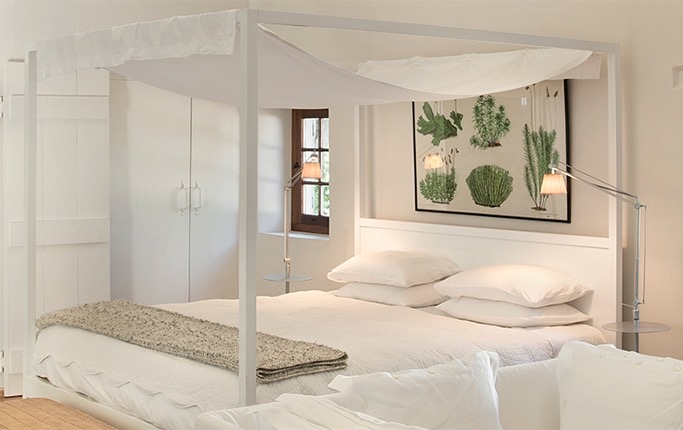 Where to Stay? Babylonstoren is a beautifully restored Cape Dutch farm in the remote rural hamlet of Simondium. The charm of the exterior and the incredible beauty of its setting is well matched by the elegant interiors where all the best of the original features have been retained – think wooden farm-doors, open fireplaces and stone walls, contrasted with modern kitchens and bathrooms. The 12 rooms start from around £375 per night, which is quite expensive but they do have a great menu and a sumptuous spa too.

The Garden Route is a stretch of road along the coast between Mossel Bay and Storms River – the names of the end points might not mean much to you, but the 300kms in the middle probably does as it’s very high on the list of things to do and see in South Africa. It’s 300kms of incredibly varied vegetation and topography, with a row of impressive lagoons and lakes keeping it green, and with fantastic coastal views, and a myriad of outdoorsy activities, and the opportunity to get up close and personal to some of South Africa’s unique wildlife.

George is the largest city on the Garden Route but our recommendation is in Oudtshoorn, the ostrich capital of the word, located in the Klein Karoo between the Swartberg and Outeniqua mountains. As well as ostriches, Oudtshoorns is the Cape Floral World Heritage Site, and has incredible views; this is a fantastic region for caves, and where you’ll find Africa’s largest showcase system. 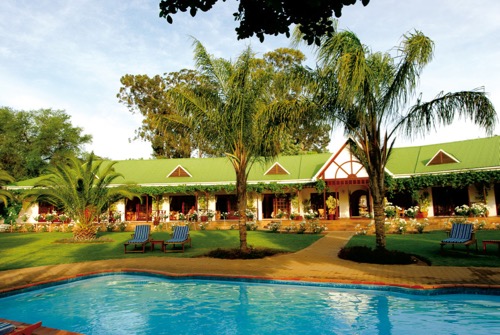 Where to Stay? A great option for exploring Oudtshoorn and parts of the Garden Route, the Hlangana Lodge is a peaceful, homely guesthouse set amongst landscaped gardens. There are just 18 colonial style rooms, they’re all spacious, with their own outside area, and there’s a lovely saltwater pool. They also offer an extensive buffet breakfast included in the price: which starts from around £105 per night.

Practical Details: Cape Town International Airport is the closest international airport to the Garden Route, but you can get an internal flight to George or Port Elizabeth if you want to start your visit there.

The Garden Route is known for its mild climate. Temperatures here rarely dip below 10°C in winter or peak above 28°C during summer. There’s rain year round, helping to keep the region green, with slightly more rain during spring.

More in-the-know ideas for holidays around the world here.