Last year South American countries topped all the big lists for the most exciting places to visit. This year they haven’t fared quite as well, but then you can’t print the same list two years running! Which got me thinking: are all the people who follow these lists going to skip South America for the next couple of years until they’re back on the hot list? If they are then this is our chance! I’m not trying to be ‘with it’. I’m just looking for great travel experiences – preferably at a reasonable price.

So Hotel Guru has put together a few ideas – there are some beach-y places, some city break destinations, a classic South American bucket-lister and options for outdoors-folk and lovers of great scenery. And once you’ve paid for the flight, prices do look a bit cooler than hot… 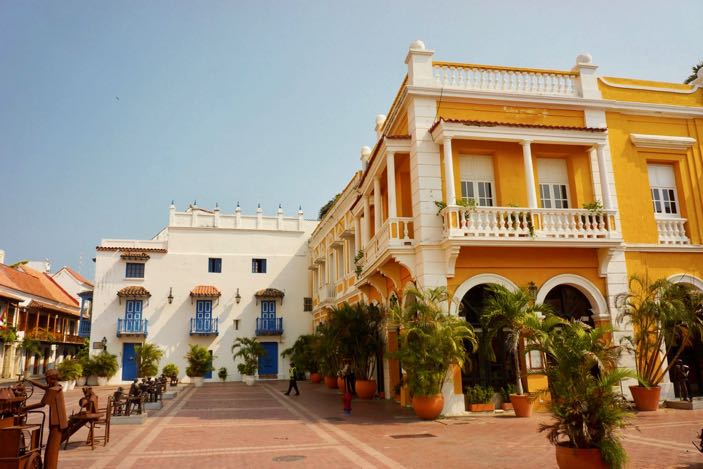 Exotically located Cartagena de Indias feels like it belongs to a different era. Once an important port on the silver and gold trade route, this city was wealthy and fortified. The impressive remnants of which are why it’s UNESCO world heritage listed, and why this fairytale of a city has so many visitors. Cartagena might also be popular because it’s also a good place to go if you want to relax – one of the best things to do here is stroll the sea wall, followed by some mojitos in a cafe or bar and some people watching. Although this may make it sound small – it’s not, Cartagena is the fifth largest city in Colombia. 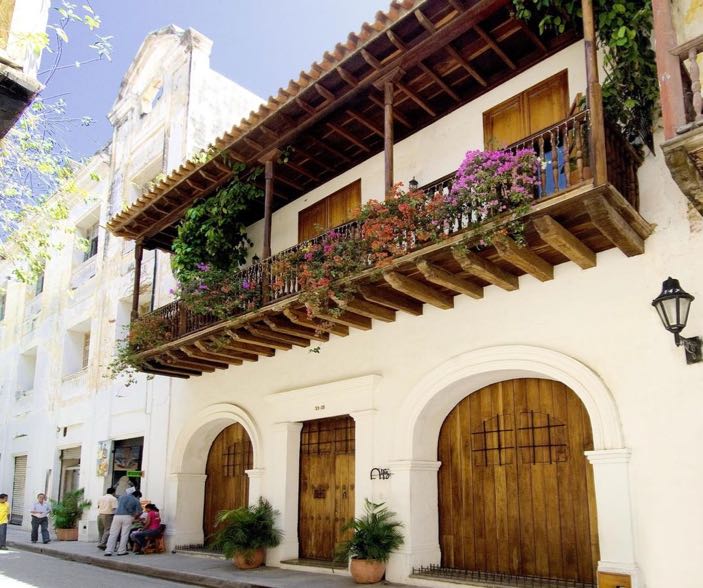 Where to Stay?
Cartagena’s Alfiz Hotel is perfectly located near the historic Old Town, so you’re close to the beach, Santo Domingo Square and Bolivar House. Its ten rooms are elegantly and traditionally decorated with colonial style, and antique furniture. And if you need a break from exploring this incredible city there’s a reading room and a small outdoor pool. Rooms start from around £100 per night.

Practical Details: Rafael Nunez International Airport is just 11kms from Cartagena, but it’s linked to other Colombian cities, then Amsterdam, Panama City, Miami, Fort Lauderdale, New York and Atlanta. There are many flight combinations, but no direct route from the UK.
Cartagena is warm. Daily averages fluctuate between 27°C and 29°C. Even at night the lowest monthly averaged minimum is 24°C during January. Most of the rain falls between spring and mid-winter, after which it’s dry and sunny. 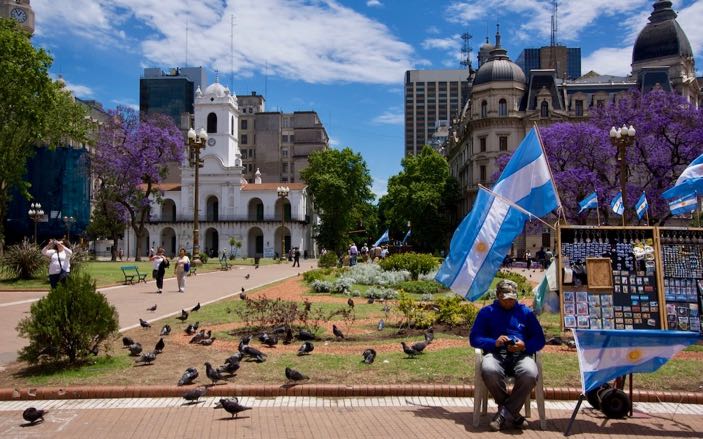 In the colourful heart of busy Buenos Aires you see businessmen in suits dashing past fruit sellers and their stalls, whilst the local butcher might be sandwiched between an internationally-known boutique and an award-winning seafood restaurant. Buenos Aires is both cosmopolitan metropolis and, in places, a small friendly town. ‘Mash-ups’ are where the appeal of this city-like-no-other lies, with its Bacchanalian atmosphere of partying ’til dawn and sleeping ’til midday, but still open for business first thing. You’ll find a mix of edgy 21st Century style encroaching politely onto the faded gentility – this city is half Latin American, half European, and totally unique. A place where everything from wine to the tango deserves celebrating in festival form! Every barrio, or neighbourhood, has something different to offer, so deciding on the best places to stay in Buenos Aires can have a big impact on your visit. 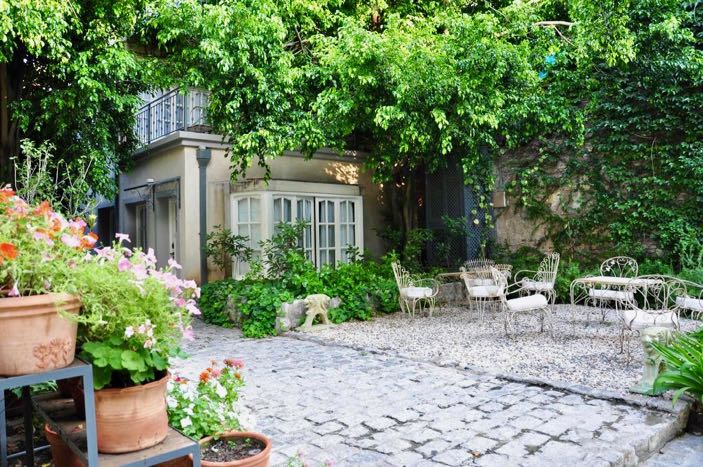 Where to Stay?
L’Hotel Palermo, with its large, green garden and stunning roof terrace, is a secluded gem in the heart of this lively city. L’Hotel has 23 rooms, all individually designed and decorated, and some with private balconies or terraces, others with garden views. The design is simple and clean, with an eclectic mix of furniture. The large pool helps you relax too. And it’s great value, with rooms starting from around £110 per night.

Practical Details: It’s possible to fly directly to Ezeiza International Airport from Heathrow with British Airways. It’s never chilly in Buenos Aires, but summer, which is between November and March, is still the most popular time to visit, with daily maximum temperatures between 25°C and 29°C.

When the Portuguese landed on this gorgeous stretch of coastline with its sunshine, white sandy beaches, coconut palms and bright blue water, they were pretty impressed. They chose a spectacular peninsula located between what they called ‘All Saints Bay’ and the Atlantic to be their main port and built Salvador de Bahia there. So Salvador de Bahia was Brazil’s first capital, and the ancient mix of cultures which gathered here – coming from Europe, Africa and the Americas – still shows. You taste it in the food, see it in the traditions and hear it in the music. The city is often in festive spirit, with music and parties celebrating one thing or another spreading out onto the colonial streets with their wonderful 17th and 18th Century architecture. 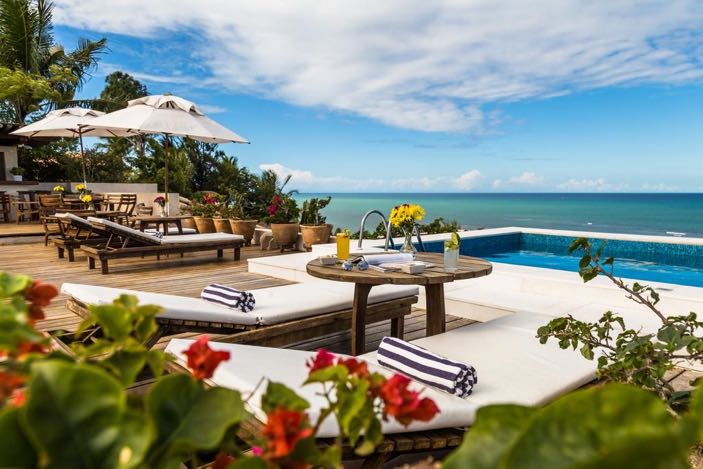 Where to Stay?
The Maitei Hotel is a sublimely elegant hotel, right on the stunning Bahia coast with views of the Atlantic. With just 17 individually designed rooms, there’s still a feel of homely hospitality, but there’s also an excellent restaurant serving local specialities, and you can eat out on the verandah with the sea as your backdrop – wonderfully romantic. Rooms start from around £145 per night including breakfast.

Practical Details: At the moment there aren’t any direct flights between the UK and Bahia’s two international airports, Salvador Airport and Porto Seguro Airport, so you’ll have to change somewhere. The journey time is about 13 hours.
Bahia is fairly warm all year round but you might want to avoid visiting between April and June as this is when this stretch of coast gets most of its annual rainfall.

If you’ve heard of Pucón it’s likely you’re a fan of adventure sports of one kind of another. For this onetime elegant playground for South America’s rich and famous has become one of the world’s top spots for adventure sports. On the eastern shore of Lake Villaricca, surrounded by hot springs and waterfalls, and under the smouldering eye of the Villaricca volcano, Pucón is the perfect place to hike, raft, sky dive, fish, birdwatch, zip line, ski and snowboard in season, canoe, kayak, climb, sail, mountain bike… the list really does seem to cover everything. This region is also known for its rare wildlife, which is why it’s so well managed, and though it might seem busy, the infrastructure is excellent. As well as the hundreds of activities and excursions on offer there are also excellent restaurants, a microbrewery and enough bars and cafes to suit everyone’s tastes.

Where to Stay?
The Tree Lodge Nidos de Pucón is a collection of handcrafted tree-top bungalows, in the lush forest just outside Pucón. These six memorable lodges are both romantic and fun, and of course totally unforgettable. There’s also a restaurant, a bar and library. And beautiful grounds. Rooms start from around £210 per night including breakfast.

Practical Details: Pucón has an airport, but it’s only open during the summer. The rest of the year you fly into Temuco, which is about an hours flight from Santiago or Puerto Montt, which are the closest airports with direct flights to the UK.
January and February are the busiest months in Pucón, but the peak season lasts from the first week of December until the middle of March. It’s probably best to avoid this period unless you book well ahead and book your main activities too. The ski season differs from year to year, but it’s also pretty busy.

Beautiful arranged on the shoreline of Lago Nahuei Huapi, and in the middle of the national park with the same name, Bariloche has a strange feeling of being in the European Alps, rather than in the foothills of the Andes. It was unknown to Europeans for a long time, but a German expat arrived and, noticing the similarity in the landscape, built charming chalets and chocolate shops. So now it’s often referred to as ‘Little Switzerland’. In winter the opportunities for skiing and snow sports are excellent, and the lake is dotted with lovely beaches, so there’s a lot to do in the summer too. 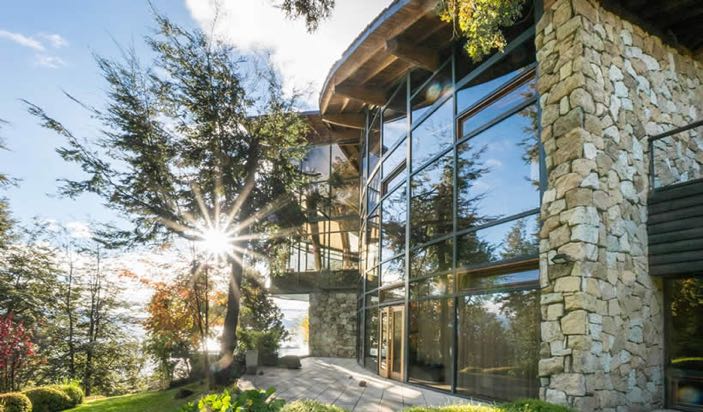 Where to Stay?
Design Suites isn’t quite what it sounds like; instead it’s a futuristic, eco-inspired lodge overlooking Nahuei Huapi Lake. The design is simple, yet clever, with plenty of glass – in the form of huge windows – and natural materials. There’s a lovely infinity pool looking out over the surrounding forest. Cool and rural! Rooms start from around £120 per night B&B.

Practical Details: The local airport, San Carlos de Bariloche International Airport is linked to Buenos Aires, Mendoza and Cordoba, but you should be able to get there with only one change.
Snow-sports-folk will want to visit between June and September, and if you’re looking for a sunny, warm holiday then you’ll probably want to visit between December and March. Even during the warmest month, January, the maximum daily average is only 23°C.