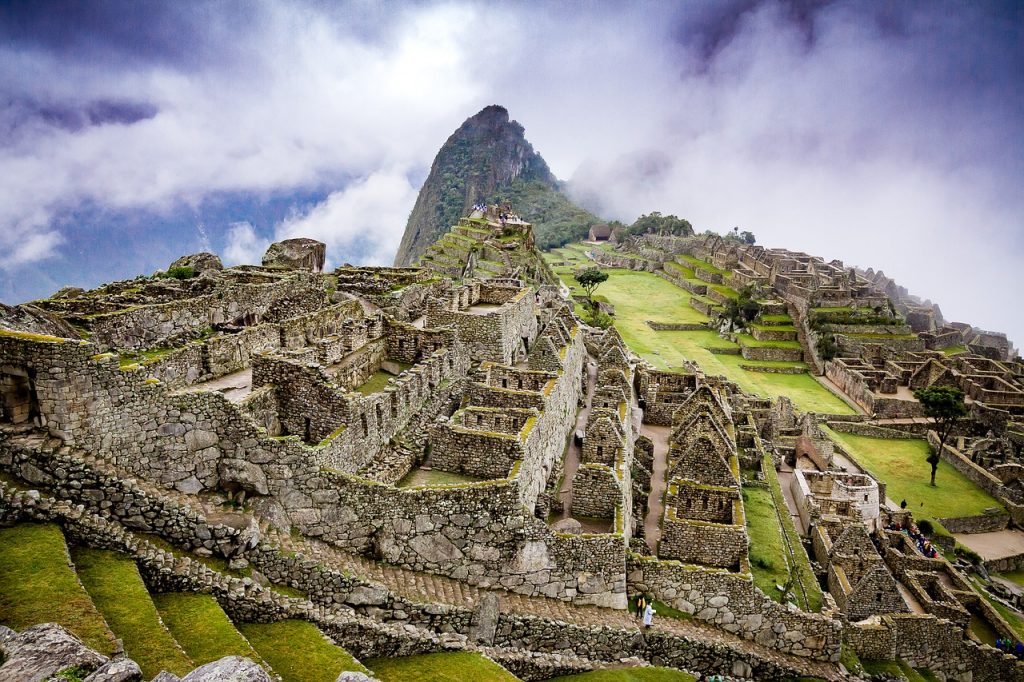 There are some places we all want to go but are putting off until the ‘right moment’. Well, I have a theory that we might be getting close to the ‘right moment’ to go to South America. Obviously the spectacular landscape hasn’t changed, thank goodness! Macchu Picchu still peeks out of the mist and the glaciers of Patagonia still sparkle blue and vast in the sun. But the cities, always vibrant and colourful, are easier to get to and the cuisine is inspiring food globally. As a European visitor you might recognise more than you’re expecting to, but add the Spanish language and those incredible backdrops, and you’ve got yourself an incredibly exciting destination – whatever you’re into. The obvious difficulty when talking about visiting a whole continent is working out where you actually want to go and what you want to experience. But I have asked the Hotel Gurus for a few varied recommendations to give you some South American inspiration and they’ve come up with some classics and some surprises – and here’s what they’re offering:

Cusco for Machu Picchu and more
Cusco is the cosmopolitan once-capital of the Incan Empire, and, as well as being arguably one of the most fascinating cities on the continent, it’s also the closest city to Machu Picchu and the Sacred Valley. So it’s quite a busy city as far as visitor numbers go. The colonial architecture is beautifully preserved and arranged in and around older Incan structures. And the food is incredible. 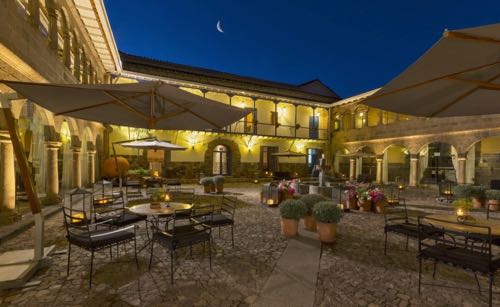 Where to Stay?
In the heart of Cusco, Palacio del Inka is a reasonably large and very elegant base.There are 203 rooms, plus a spa and an excellent restaurant serving Andean cuisine. Double rooms start from around £130 per night including breakfast.

Practical Details: Cusco’s weather is cool throughout the year, with maximum average highs peaking at about 11 or 12°C each month, but it’s driest between June and September, and wettest between November and April. At the moment Cusco doesn’t have a proper international airport, and most people fly via Lima, which is about a 19 hour flight time from either Gatwick or Heathrow.

Santa Marta Beach Break
Santa Marta sits on Colombia’s north coast and was the site of the country’s first Spanish settlement, but its natural beauty surpasses even its historical interest. Santa Marta has a Miami-like feel, with wide, sandy beaches stretching along its length and numerous trendy bars and restaurants. Just out of town is the Parque Nacional Natural Tayrona, and you’re a trek away from some of the world’s most spectacular ancient ruins. This is also a great spot for diving and snorkelling. 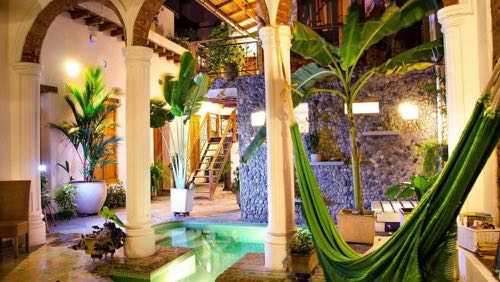 Where to Stay?
Casa Verde is a nine room hotel in the heart of town, just a short stroll from the beach. There’s a central courtyard with a pool and palm trees, and the decor is is mostly white with snaps of bright colour. Doubles start from around £140 B&B.

Practical Details: Santa Marta’s airport is called Simón Bolívar, and is only about 20mins outside town, at the beach resort end. You can arrive here via Bogotá or Medellín. You can fly direct from Heathrow, but most flights stop in the US or Spain. You can also leave from other UK airports. In Santa Marta the weather hovers around 25°C all year round, with 25°C to 31°C during December. July through December is when you’ll catch most of the rain, but it’s hardly a rainy destination.

Adventure in the Torres del Paine
The Parque Nacional Torres del Paine is one of the world’s great wonders: a landscape of granite pinnacles dominating bright blue glacier-carved lakes and tundra plains where herds of Guanaco graze. All this at almost 2000 metres above the Patagonian steppe. Hiking this region is one of the great thrills of being alive: glaciers glow with a blue light, trails lead through dense green forests where strange ostrich-like birds flock and the bridges feel rickety and remote – but are actually quite safe. The weather is dramatic and unpredictable but when it’s clear it’s incredible. 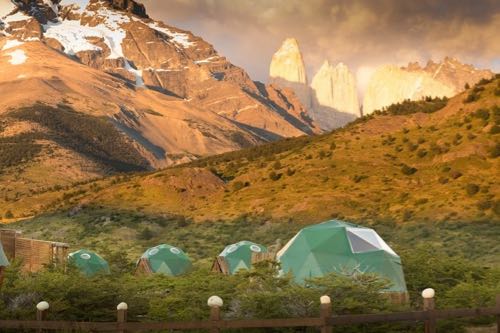 Where to Stay?
The individual domes of the EcoCamp are really the only place to stay if you want to be in amongst this great landscape. The 25 domes are cosy, but the views are right there outside. They offer picnics for your trips out and there’s a restaurant for the evenings. Standard domes are around £175 per night full board.

Practical Details: Puerto Natales does have its own airport but commercial flights are unreliable and your best bet is to arrive at Punta Arenas via Santiago. It’s not possible to fly direct to Santiago from any UK airports – at the moment. December through February are the most popular months to visit the Torres del Paine, but it’s picturesque in winter if you want to avoid seeing it with anyone else.

Escape to Jericoacoara
Jericoacoara is hard to get to, you have to traverse unpaved roads through sand dunes, but it’s oh so worth it when you arrive. It’s stunning. This level of beach + lagoon + sand dunes beauty is usually reserved for tropical islands, but it still definitely classes as paradise. Plus there are excellent pousadas and restaurants and proper South American nightlife. 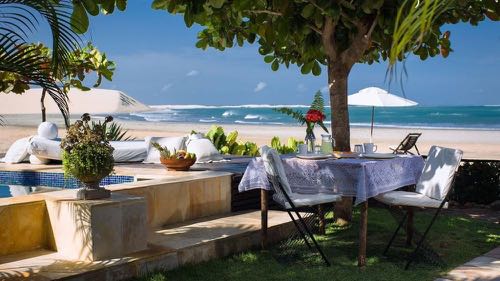 Where to Stay?
Peaceful and intimate, Casa de Areia is the perfect luxury seaside escape. With decor that’s simple and elegant in its six rooms, the Casa de Areia offers tranquility everywhere you look – whether you’re looking at the pool or the beach. Double rooms start from around £175per night including breakfast.

Practical Details: We said it was tricky to get to… Until June 2017 the nearest international airport was Pinto Martins in Fortaleza, now Jericoacoara has its own airport, but it’s only linked to Campinas, Recife and São Paulo. To get closer you need to get a bus or a 4×4 across the dunes. Jericoacoara’s average temperature range is between 29 and 35°C, and the rainy season is between February and May.

Colonial Treasures and Mountain Views in Salta
Close to the Peruvian boarder in the foothills of the Andes, Salta is famous for its beautifully preserved colonial architecture. But it’s also got a great cosmopolitan vibe. And, as well as the beauty in town, you’re also in a picturesque spot, linked to the near mountain peaks with cable cars and the world’s fifth highest railway. 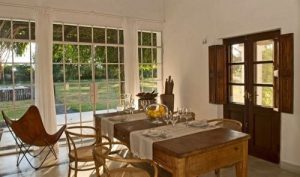 Where to Stay?
The Finca Valentina is a chic country house turned boutique hotel with beautiful views of the Andes. Traditional from the outside and modern within, the Italian owners have brought their own style to the place – and style appreciated by the Prada family, among other well known guests. There are large gardens and a pool, and just eight rooms. It’s great value, with double rooms starting from around £110 per night B&B.

Practical Details: Salta’s airport is around 10kms outside of town and has daily links to Buenos Aires, Córdoba and Mendoza. So you’ll definitely have one stop, and more likely two, on your flight from the UK. January has the warmest maximum average temperature, at 28°C, while June has the coolest, at 19°C.

About Us
The Hotel Guru has done your hotel research for you. We’ve commissioned a collection of leading travel writers and journalists to offer their recommendations on where to stay, found out all the important, and minute, details about each property, and then cross referenced that with guides we respect. So if having a hot tub is important to you you can search by that, likewise pet-friendly properties and hotels with a great wine list.  See our other travel ideas here