I have absolutely no problem recommending places to visit week after week. I spend a lot of my time thinking about where I’d like to go on holiday, so it’s really a pleasure to have someone to share my thoughts with – my children are no longer interested… But I thought this week I would get some recommendations from the Hotel Gurus, after all they are the experts – where would they recommend for a special summer holiday this year? This is what they say we should consider:

Experience the glamour of the Cyclades without the crowds

Santorini and Mykonos are well loved for their beauty and glamour, but the Cyclades have a lot more on offer. Paros is the ferry hub, which makes it a great base for exploring the whole group, plus it has some of the region’s most idyllic and pristine beaches. The history and mythology of Paros are fascinating and it’s quite lively and colourful after dark. People seem to be put off by the ferry, but they shouldn’t be. But the fact that they are is of benefit to those of us in the know… 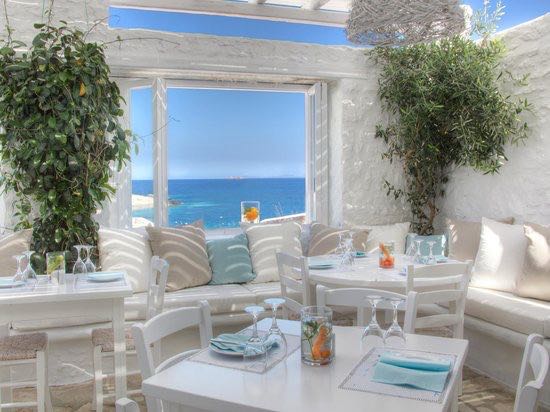 Where to Stay? The Minois Village Hotel & Spa is a stunning spa resort dripping in blue and white seaside chic, with a collection of 40 rooms, suites and private villas. Almost on Parasporos Beach. If this resort were on Santorini it would be in all the honeymoon magazines all the time! The views are a Grecian idyll, there’s a very nice bar and restaurant – with the option for private dining, a spa and a large pool, and there are almost enough private balconies to go around. Yet rooms start from €158 per night including breakfast this summer.
Practical Details: Paros is one of the easiest Cyclades to get to, you can fly direct from Athens to Paros National Airport. You can also arrive via ferry from Piraeus, or one of the other Cyclades. This month the average daily maximum temperature on Paros is a very civilised 25°C. Though it’s still idyllic come September, and it’ll be much quieter.

Forgotten Turkey?
Up until a few years ago Turkey seemed to appear on every list of the places we should be travelling to: be it Bodrum, Fethiye, Marmaris, Antalya, or one of the many smaller spots around and in between. But it has dropped right off the list recently. There’s good reason for this, but Turkey’s political situation hasn’t changed its beauty or history, and many of these Mediterranean towns have very safe and secure tourist infrastructure. But just a fraction of the visitors they need. So consider it carefully. But if you’ve ever wanted to experience the beauty of Fethiye’s incredible natural harbour, and stunning Ölüdeniz Beach, then this might be the perfect time for it. And it is exceptionally beautiful! 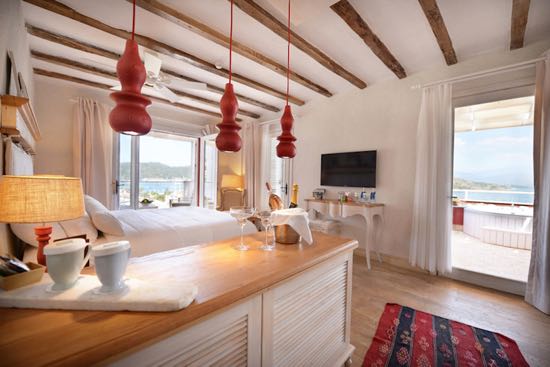 Where to Stay?
The Hotel Unique is a wonderful mix of traditional Turkey and boutique hotel luxury and detail – the entrance is through a Lycian ruin! This 19 room, adults-only hotel resort is carved into the cliffs overlooking a marina and the Aegean Sea. You’re well placed for Fethiye’s markets and museums, and lively bars and restaurants, but there’s also a fantastic in-house bar and restaurant. And a hammam. And complimentary bike hire. And rooms start from as little as €119 per night B&B.
Practical Details: The closest international airport to Fethiye is Dalaman, which is about an hour away from Fethiye by bus – less by car or cab. Fethiye benefits from plenty of sunshine, but it also gets a breeze, which stops this part of Turkey becoming too stifling, and even during July and August you’re looking at maximum temperatures of about 28°C.

Andalucía has a lot more to offer than just the glitz and glamour of the Costa del Sol. The eight provinces of Málaga, Granada, Almería, Córdoba, Jaén, Huelva, Sevilla and Cádiz are all well worth visiting if you can drag yourself inland. Andalucía’s cities are grand, noble and usually ancient, each with a glorious architectural legacy. Seville and Granada are the queens, but less-known cities and towns such as Córdoba, Almería, Ronda and Ubeda each have a rich mix of castles, palaces, churches, squares. And away from the cities, Andalucía’s interior is varied, from the fabulous wooded hills and craggy peaks of the North – heaven for hikers or riders – to the Sierra Nevada, the tallest mountain range in Western Europe outside the Alps and the Tabernas where spaghetti westerns were filmed. 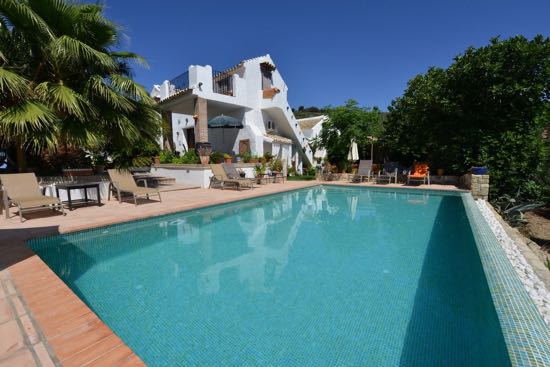 Where to Stay? Off the beaten Andalucían track, the Cortijo La Haza is a traditional, four room property, offering superb table d’hote style suppers and a pretty garden with a very welcome saltwater pool. If you want to really discover Andalucía, then it is perfect: it’s surrounded by olive groves and great walking trails, and on a clear day you can see all the way to the Sierra Nevada mountains. This is a small property and the owners really make an effort for all their guests. It’s really excellent value too, with rooms – plus breakfast – starting from under €90 per night.
Practical Details: The Cortijo La Haza is about an hour from Malaga or Granada, both of which have airports with direct links to UK airports. Andalusia’s interior can be hot, but here on the hillside there’s a regular breeze which keeps things comfortable. If not then head for the pool…

A Room with a View just outside Florence 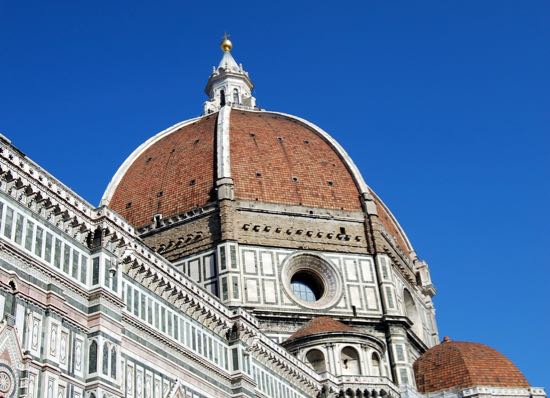 Florence is too hot for many of us during the summer months, but not if you’ve a place in the hills to return to at the end of the day. And this part of Italy is just blazingly beautiful come summer, what with the olive groves and ripening vineyards, the long evenings which cool gradually… There’s just something magical and about Tuscany in the summer. 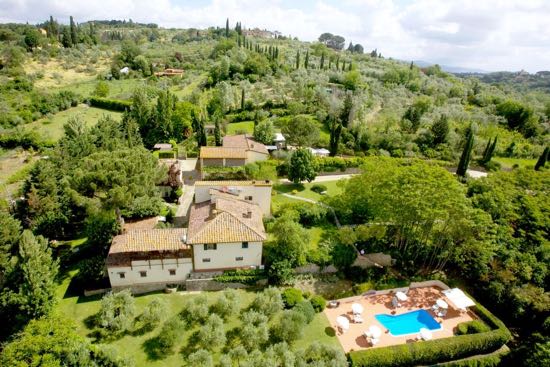 Where to Stay? Marignolle Relais & Charme is a wonderfully private retreat in the Tuscan hills for a special summer holiday. There are just nine chic rooms, decorated with antiques and beautiful fabrics, but it’s the pool and gardens which make this property so relaxing. A generous breakfast spread is served on the verandah, and they offer cooking classes too. In the colder months the verandah is glassed in and there’s a welcoming open fire in the large living room – which is also where you’ll find the honesty bar. Rooms start from around €185 per night B&B. And you’re just 15minutes from Florence.
Practical Details: Florence’s America Vespucci airport has limited international connections, so if there’s nothing that works for you, try Pisa Airport. Florence itself is known for baking during July and August, with average maximum daily temperatures of 31°C for both months. It’s far cooler in the hills though. But if you’re not tied to the school calendar you might want to consider leaving your special summer holiday until September, which is still sunny and hot, but not with quite so much oomph.

Provence from one of the Prettier Hilltop Villages 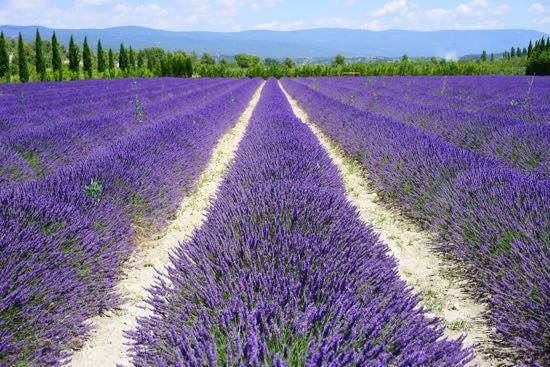 Provence suffers from too much heat and sunshine in a similar way to Tuscany. The historic riches are spectacularly beautiful when they’re bathed in the summer sunshine, but it does tend to bake one. However if you want to see the lavender growing in fat, straight rows and experience those long, drowsy lunches in a picturesque, medieval hilltop village, then summer is when you’ll see this place in all its glory. But you won’t want to stay in town at this time of year, the hilltop villages get the breezes and instead of feeling exhausted come evening you’ll be invigorated and ready to stroll charmingly lit medieval streets. 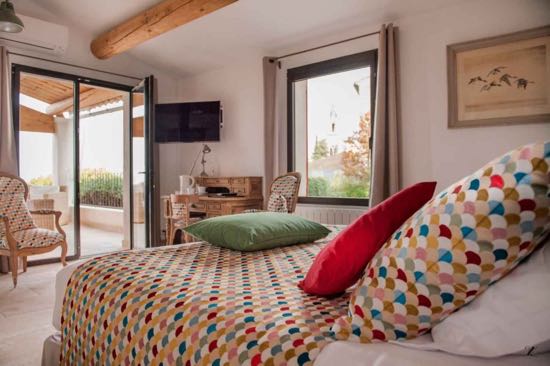 Where to Stay?  Le Clos du Buis is a small and charming, farmhouse-style property in a pretty hilltop village, with a choice of rooms, suites or self-catering apartments. Some of the rooms have terraces or balconies with lovely views over the hotel’s gardens and the valley beyond. There’s a lovely pool too. There’s no restaurant but there are plenty of options locally. Double rooms start €156 per night B&B during peak season.
Practical Details: Avignon and Marseille are the closest major centres to Bonnieux, where Le Close du Buis is located. Avignon has limited UK connections, but it is connected fairly regularly with London City airport. Marseille is a much larger hub. It’s difficult to get exact weather details for small, but pretty, Bonnieux, but Avignon regularly expects temperatures of 30°C come summer. It is definitely cooler in the hills, though.