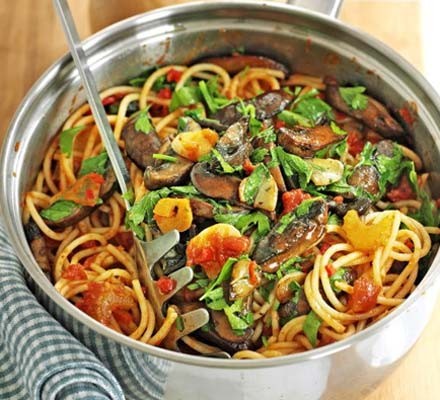 This is my version of a recipe first published by BBC Good Food. To be honest, I was worried my carnivore Husband would be poking around his plate looking for some meat, but even he thought this was a surprisingly tasty supper.

Boil the spaghetti according to pack instructions.

Meanwhile, heat the oil in a large frying pan and cook mushrooms on high-ish heat for 2 -3 mins until golden.

Add the garlic, celery, chilli and onion and fry for another 4 mins.

Stir in the tomatoes, season and bring to the boil. Reduce the heat and simmer for 5 mins.

Share out the pasta between two warmed bowls or plates and ladle on the sauce. Sprinkle on the snipped basil and enjoy.