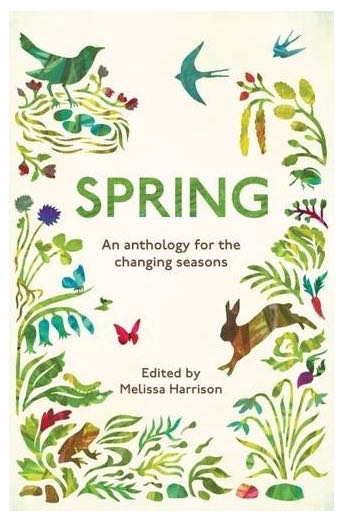 When a good chunk of your day is spent walking a dog, you become quite attuned to the changing seasons. Just recently there has been a subtle shift in the wind and the quality of light down by the Thames, my favourite spot. The sky feels more expansive and there is a dash of warmth in the air, or the promise of a summer breeze on your cheek. Spring, thank goodness, is finally on its way!

To capture the beauty of our changing seasons, The Wildlife Trusts is bringing out a series of anthologies, beginning with a first book entitled Spring. This is a very readable collection of poetry and prose, celebrating Britain in springtime, and bound in paperback with an attractive, parchment dust jacket.

Throughout the ages, from Chaucer to D.H. Lawrence, writers have tried to document this loveliest of seasons in their own words. Spring is a commonplace event and yet each year it manages to inspire hope and a sense of rebirth. In this anthology, edited by the author Melissa Harrison, a gamut of writers, old and new, some famous, some not so, record their impressions of Spring.

“Then quite suddenly, one morning, the change came,” writes D. H. Lawrence in his 1919 essay Whistling of Birds, as quoted in the book. “The wind went to the south, came of the sea warm and soothing. In the afternoon there were little gleams of sunshine, and the doves began, without interval, slowly and awkwardly to coo.”

The extracts in the anthology range from observations of nature – warbling birds, hedgehogs, bees, basking adders and a “triplet runt” lamb – to more narrative descriptions of Spring. Nature writer Rob Cowen gives a touching account of how he revealed to his dad that he was to become a father himself, during a walk “into the silver morning” with birdsong washing over Britain.

It’s not all about nature per se. The effects on our human lives are also recorded when Melissa Harrison quotes from her own novel, Clay, about urban wildlife: “Women, bound by the same circadian rhythm, swapped gloves for sunglasses in their everyday handbags. And at the end of each school day the kids streamed screaming out of the gates, eager not for home and TV, but just to be out, free, in the burgeoning world.”

The book also deals with the notion that any rebirth is inevitably associated with death. From the grip of Winter comes the quickening of Spring. “Le monde est morte. Vive le monde!” cries Lawrence. The poet Philip Larkin picks up on this theme with his elegant poem, The Trees:

“Is it that they are born again
And we grow old? No, they die too.
Their yearly trick of looking new
Is written down in rings of grain.”

The anthology is simply laid out with author biographies at the back (a useful tool to research some of the less well-known contributors). My only criticism would be that each extract opens without a title or credit, which left me continually flipping through to the end of the entry to find out who wrote it. The anthology is, however, an evocative tribute to spring, chock-full of the sounds and sensations of this joyful season.

Spring is available from Amazon. The paperback will help to raise funds for Wildlife Trusts around the UK.