Here are two amusing stories from Sir Lanka written by Miranda, who excels at observing the foibles and behaviour of people wherever she may be, in the UK or Sri Lanka, the two places she and her family call home… 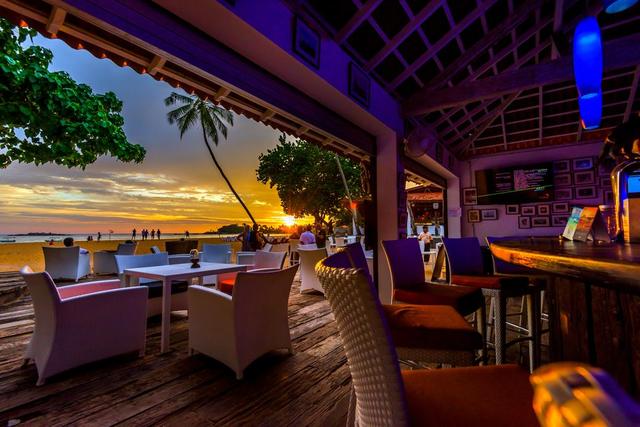 The hubby, youngest unmarried and I were sitting at a beach bar in Unawatuna. It was early evening. I noticed a rather wobbly young chap plonk himself down at the next door table.  No sooner had he fallen into his seat than he jumped up again and lurched towards us. “Hello, I’m Daniel”  he politely introduced himself. Then he proceeded to ask where we lived. Having discovered we came from Earls Court, he trumped us with, “Well ….. I live in Knightsbridge!  I am really, really ‘posh’.”  Frankly, in my book, anyone who says ‘posh’, isn’t!  However, I liked the look of young Daniel, even though Daniel was frankly as ‘drunk as a skunk’.  He then weaved his way back to his male companion, who seemed to be acting as his nanny.

The nanny was doing a very bad job indeed of keeping Daniel off the cocktails. Two very tall, pink and orange concoctions arrived at their table. A few minutes passed before Daniel was back at our side.  “Hello again!  I know where the best, most amazing parties are in London!”  I like people sharing good things, it shows a generous spirit and Daniel seemed to have a desperate need to share. “How marvellous, Daniel.  It’s very useful to know these things.” I replied. Daniel wasn’t finished. We thought he might have been (his eyes were closed for a bit), but Daniel had obviously decided we needed more information to make a judgement call on the quality of his parties.

“Best parties EVER!  Lots of them. Sex parties. Even group sex parties!  And loads and loads of drugs!” “Good for you, Daniel, that all sounds fabulous. How simply lovely for you.”  Daniel nodded enthusiastically whilst sort of winking at us.  His ability to wink properly was severely compromised by the copious amount of pink liquid he was consuming. Off he trotted again. “I think I can find some cocaine!  Ssshhhhhhhh!”  Daniel looked thrilled with this revelation. He was particularly pleased to be back at our table to deliver this breaking news. He looked around for an available seat to continue this convivial ‘share and tell’ without having to scurry back and forth so often.  All this to-ing and fro-ing was exhausting. Sadly for Daniel, this was to be his last impromptu chat for a while. The waiter (who had lost patience with keeping track of naughty Daniel’s whereabouts) frogmarched him back to the useless nanny/bodyguard with strict instructions to stay at his own table. Daniel looked suitably chastened and contrite, though his parting shot to us was a finger pressed to his lips and a loud “Sssshhhhhhhhh!!” accompanied by the trusty, wonky wink! 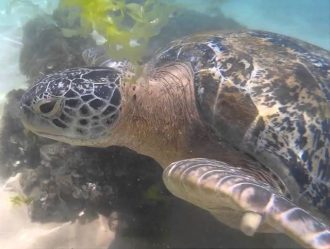 In the beach bar at Wijaya, you can watch the turtles surf on the waves amongst people swimming, whilst lounging in chairs with your feet propped up on the veranda. It’s a heavenly way to pass a few hours. I was vaguely aware of a lady in the shallow water, kissing a man for an inordinate amount of time. I was contemplating if either of them would feel the necessity to come up for breath in the foreseeable future. Apparently not. The scenario playing out before me soon had my full attention. This woman had the lung capacity of an ox. The gentleman, on the other hand, was starting to show signs of distress, waving his arms about in a manner that seemed to signal he was in fact being suffocated! Luckily she managed to lose her footing which gave him the opportunity to escape her clutches for a tantalisingly brief second.

His freedom was short-lived. This determined female brought down her companion and basically wrapped herself around him like a python ready to swallow him whole. He was being slowly strangled, in full view of us!  Rather sensibly, this poor chap decided he might be safer playing dead. He lay flat in the water like he’d been crucified. Surely she would release him now?  Sadly, we were all sorely mistaken. She jumped on his prone body while he slowly disappeared under the surface. Meanwhile, she had a comfy human lilo to sit on.

This person had no shame.  “For goodness sake, unhand him now.”  I realised that I’d spoken out loud, which alerted others to the one-sided seduction scene below.  I was mildly concerned he would drown in front of my very eyes!  She’d already suffocated him then strangled him, why stop there?  By now, our end of the veranda was completely spellbound by the lustful antics of this woman.

The exhausted male managed to break the surface to gulp a few lungfuls of oxygen before rolling his mate off.  The tables were turned, literally. He grabbed her ankles and, turning her into a wheelbarrow, he marched her towards the edge of the beach that had notoriously dangerous currents, where he swiftly deposited her.  A bit like fly tipping, I suppose.  None of us dreamt of objecting.

“Escape man!  Go!  Go!!  Don’t look back, flee for your life!”  There was a collective sigh of relief from our viewing stand.  We were all rooting for this guy’s survival.  She managed to beach herself on a sandbank whilst trying to desperately cling onto the escapee’s legs.  When he eventually crawled onto the beach, shattered by his ghastly experience, he stumbled to his sunbed to die, probably.  Rather alarmingly, I witnessed her smile to herself, as if to say, “you win some, you lose some,” like a praying mantis before she devours her mate!  She rolled over on her sandbank to get into a better position to view the rest of her potential prey cavorting in the waters…

If you’d like to read more of Miranda’s funny stories set in England and Sri Lanka, click here