I have just spent two days in Swindon Hospital and experienced a health scare made worse by….well read on and find out!!

On Sunday morning I woke up with a bad pain under my shoulder blade which then moved to my diaphragm and, scared that it might be the start of pneumonia or pleurisy (from memories of 1991!!) and being Easter Sunday, and also that my lovely hosts and I were due to see Show of Hands at the Albert Hall, I tired to ignore it, plied myself with pain killers and went up to London that evening.

By the time we had driven there I was in agony and so my friends started scouring the area for rogue ambulances looking for an accident – I gritted my teeth and asked them to get me to the Albert Hall on the safe premise that any public place which attracts 5000 people must, by law, have some sort of medical back up. My friend went off and returned quite quickly with two medics and a wheelchair with which they trundled me off to a private room. They were incredibly efficient and kind, and all my vital signs were good with no imminent stroke or heart attack apparent. Good tip – if ill in London go to the Albert Hall, they were fabulous!! They were concerned that my blood pressure was a bit high, but not really surprising bearing in mind the stabbing pain that I had endured for 12 hours or more, so they let me back in to the theatre with another pain killer for good measure.

I sat through the show, which was excellent, (Show of Hands are a largely unknown band who have managed to fill the Albert Hall four times to date!) and we arrived back to a village close to Swindon by about 1am. Still feeling very wretched and rather woozy from the amount of Paracetamol consumed over the day I went to bed with a make-shift hot water bottle (one of those freeze or heat pads) and spent an uncomfortable night. However, on waking the next morning the pain was much less severe and I would have left it at that. BUT my friends were still concerned and insistent that I went to A&E so I did – at 12.00 noon on Monday. I knew it was Easter Monday and not a good idea, but for once I did what I was told.

I sat in the waiting room for just over 6 hours and then I saw a triage nurse (by that time the only feeling in my diaphragm was a bit of tenderness and all pain had ceased, so it was probably just indigestion). Nevertheless I was, by now, in the system! 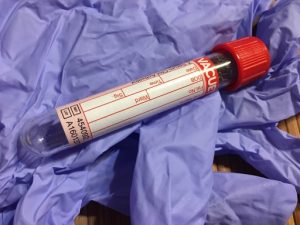 We had the usual problem with trying to get blood out of me – please explain to me why is it that no medical people ever believe me when I tell them that I have difficult veins? They all look sympathetically at me and pat my arm and tell me not to be worried, and forty minutes later we are both in tears and all my blood still just where it should be – inside my body. The nurse finally did what I asked her to do in the first place and went off to return with the finest needle possible – the one that they use on day old babies. With infinite patience she coaxed enough red stuff out of me to fill the vials and off they went to be tested for all sorts of things – but not a pain in the diaphragm!

All my other vital signs were still OK but by now my blood pressure was sky high (about 198 over 105) – anybody sitting in that cattle market for 6 hours would have high blood pressure and nearly an hour of trying to get blood didn’t help.

Back to the waiting room.

Another hour or so and I was called for a chest X-ray. Then I was told to sit in the inner sanctum, another waiting room, but this time surrounded by confused looking elderly people who were stacked up on trolleys in every available corner. A jolly, black, male nurse, by the name of Nelson, took over my care. He took my BP again. It was up to 126 over 114 and he looked worried. He gave me a pill to reduce the pressure and an injection in my stomach, administered where I sat in the waiting room! He told me that my BP would now go down.

Another hour and BP now up to 136 over 120 so another tablet was swallowed.

The addition of a drug addict, who turned up and sat in the corner moaning, sucking his thumb, picking his nose, crying, sobbing and shaking, didn’t really help and the BP went up to 246 over goodness knows what! Nelson came back to see me and wondered out loud why my BP wasn’t behaving itself and going down. I muttered something about being tired, hungry and grumpy and that the idiot opposite didn’t help. Everybody froze – I forgot that in PC UK you really cannot criticise anybody without inviting a legal action. The addict came to, and asked me “who do you think you are calling an idiot?; you shouldn’t look down on me just because I am in this state”. I admit I really was very tired or I would have ignored him, but I carried on, “Idiot is about the kindest word that I can use to describe you. What have you taken?” “Ecstasy”, he replied with a belligerent attitude. Me – “do you know the meaning of the word ecstasy? It means that you are incredibly happy and in a state of euphoria, not sitting in the corner crying – that’s called misery.” He looked surprised so I continued, “If that blasted drug was called misery instead of ecstasy would you take it?” He considered the question and shook his head and muttered “No”. “Well there you are,” I said, “Next time you are tempted to buy ecstasy just remember my words and call it misery and you won’t buy it”. My friend, back in Penang, is convinced that this was all Karma and the entire reason for my being at Swindon hospital was to meet this man and change his life. Somehow I feel cynical about both parts of that!

The next thing on the programme was an, ‘infusion’ of some sort of blood thinning chemical as, by now, they thought that I might have a clot, which is when I put my foot down. As there were no beds available this was going to take place in a cubicle and it could have been Piccadilly Circus for the privacy.

We were now at 1.00am Tuesday, some 13 hours after I had arrived. I refused the infusion, which made them all unhappy, and I finally saw a girl who looked like a teenager, who turned out to be a fully- 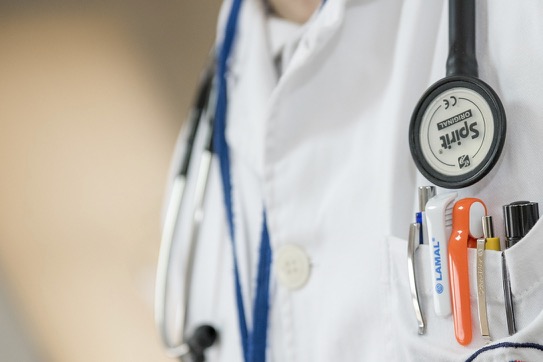 fledged doctor. She went through the whole rigmarole again, and asked me all the same questions, almost as though she was sure that if they did it enough times everything would go back to normal. She seemed to be most concerned when she asked me if I drank alcohol and positively upset when I said about half a bottle of wine a night i.e. three glasses. She told me gravely that that is way over the recommended intake. Three glasses seems very conservative to me and anyway, is it actually possible to open a bottle and have only one glass?

She couldn’t understand why the BP was up, but the heart rate wasn’t (at 85) but I kept on telling them that my normal pulse rate is around 60 so 25 up was really quite a lot. It seems that, at the advanced age of 67, it is impossible to be otherwise perfectly healthy and with no regular medication, so they were convinced that there was something very wrong going on.

There was and it’s called 13 hours of constant hassle, noise, bright lights, beeps, tension, prodding, pricking and other personal intervention, all the time sitting on a pretty hard seat opposite a drug addict suffering from withdrawal symptoms!

I patiently explained to the young medic, that I am pretty difficult to get blood out of and equally bad at being filled up with liquids via a needle and a tube, and that, contrary to expectation, an ‘infusion’ was likely to have my BP go so far up that the machine would break. I told her that the very best thing that they could do would be to lie me down somewhere cool and dim and as quiet as possible, which they finally did and guess what? Yep my BP started to go down so that, less than an hour later, we were at 164 over 98, which is actually reasonable.

So at 4.30am they wheeled me into a ward and around 5 am I managed to get some sleep; only to be woken at about 6.30 am asking if I would like breakfast – NO! Again, shortly thereafter, I was woken by somebody who wanted to changed my sheets. I explained that I had used them for only about 4 hours so this was unnecessary.

Having found an infection in my lung which I expected, having had this damn dry cough for two months, and having already gone through two lots of anti-biotics and three bottles of cough medicine, they decided that I didn’t have a clot after all.

I got out at about 2.00pm on Tuesday and drove up to Warwickshire to stay with friends overnight and catch my plane back to Penang the next day.

Needless to say, nobody at the hospital ever did anything about the original pain in the diaphragm so it probably was just indigestion, and as I have never knowingly had it, I have no idea. It remains a mystery.

The doctor wants me to have some echo thing for my heart, which is an out-patient prodecure and a letter will be sent to my doctor who won’t know who I am. I will have it done in Penang where it will cost pennies and will be done with the results being given to me within a couple of hours.

I have decided not to have a health scare again. It is just too exhausting. Frankly, I am surprised that anybody leaves hospital feeling well. I certainly felt worse than when I went in! Yes the BP is a perennial problem and so I have to go back on the regime of exercise and diet that brings it down. I don’t like all the side effects that these drugs list as they simply don’t sound safe. No wonder the NHS is in a mess and, apart from myself, everybody there was taking expensive multiple medications some of which turned out to be totally unnecessary.