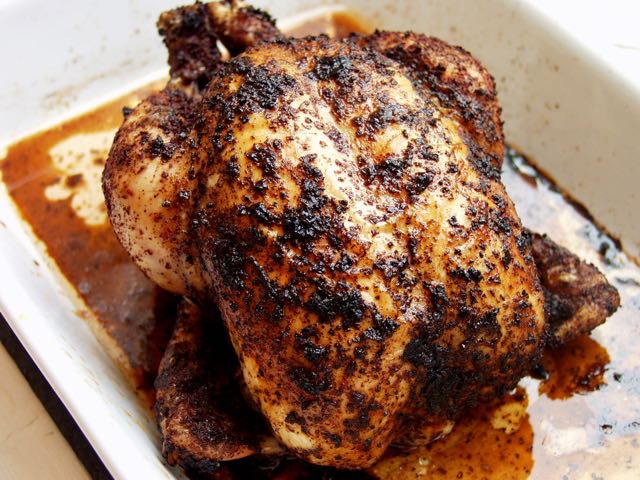 There are more chickens than any other species of bird…which is just as well because, with its mild taste and uniform texture, it is one of the most popular foods eaten worldwide. My family is no different and a roast chicken is always greeted with enthusiasm when I serve it. So, to ring the changes, I use this recipe every now and again. Sumac is a lemony spice available in Middle Eastern stores and several supermarkets.

How to prepare
Preheat the overn to 200/400F/Gas 6.
In a bowl, mix the sumac, thyme leaves, garlic, 1 – 2 tbspns olive oil and salt/pepper.
Spread this mixture over chicken and put in roasting tin into hot oven for 75 mins – or longer if a bigger bird.
Dry the potato cubes on kitchen paper and season with smoked paprika, salt and pepper. Heat 1 tbspn olive oil in small roasting tin and then add cubes coating them evenly in the oil and roast for 30 mins until golden and crisp.
Bring large pan salted water to the boil, cook the beans for three minutes, drain and toss with a drizzle of olive oil, the parsley, salt and pepper.