Greece is one of those summer hot spots my dreams take me to.  I probably enjoyed Captain Corelli’s Mandolin too much – if that’s possible. The lure of the Greek islands, with their coastlines which alternate sandy coves and rocky cliffs, their waters in all the shades of blue and green, the olive groves, the ancient treasures and buildings like stacks of sugar cubes…  And they’re just so varied!  The Ionian and Cycladic groups are chalk and cheese, and then of course the mainland is another story entirely – maybe a chalky cheese made with sheep’s milk if we’re to continue the analogy?

I love the Mediterranean sun and the lifestyle it seems to encourage.  The fresh eating late in the evening and the lazy lunches overlooking water.  It’s summer holiday bliss.  And I adore the romance of Greek history.  So much drama and tragedy and people embarking on great quests in the name of love.  And that’s the factual history as well as the dramas and mythology, which you can see here played out in ancient theatres under the stars. There’s just something timeless about Greece, both in the immediate sense, where it’s easy to lose your sense of being on the clock all the time, and in the larger sense where often years are measured in their hundreds of thousands, and yet still life continues. And the coffee is just plain excellent!

The only problem is choosing your destination.  So this year I have sent a little quiz out to the Hotel Gurus to see what they recommend for a few different types of Greek holiday experience: a beach break idyll, a romantic spot, an island escape, somewhere to have fun on a budget and a cool mountain escape.

Halkidiki’s Antigoni Beach Resort is an elegant but affordable hotel right on one of the region’s best beaches.  There are 50 light, airy rooms and suites with whitewashed walls and stunning views.  Some of the suites even have private hot tubs.  The hotel also has a spa, a private beach and a beautiful outdoor pool.  Rooms start from around £90 per night.

Unspoiled and peaceful the Halkidiki Peninsula drapes three long fingers into the Aegean, all lushly forested and lined with white, sandy coves.  Generally the beach resorts here are quite glamorous and there’s plenty to do for walkers and those interested in history.  It’s also known for its beautiful wildflowers.  The closest airport is Thessaloniki, which is about a three hour flight from the UK, then it’s about a 90 minute drive.  Halkidiki is beautiful in spring and September, and it’s also great in summer, though it’s really popular with Greek locals too, so a lot gets booked up in advance.

With Romance in Mind
The F Zeen Retreat on Kefalonia is a romantic hotel perched on a hill overlooking a beautiful, white sandy beach. Its 25 rooms are designed to inspire calm, and they have lovely balconies.  Plus there’s a glorious spa and a very nice pool area.  Rooms start from around £120 per night.

It was Captain Corelli’s Mandolin which put Kefalonia, largest of the Ionian Islands, on many people’s travel radar. But even the island’s recent popularity hasn’t decreased the rural charm of the pretty villages or the unspoiled sands or waters of the numerous almost-perfect beaches. Monarch and Thompson operate charter flights from Birmingham, Bristol, Cardiff, Gatwick, Luton, Manchester, Newcastle and Stansted, then it’s a good idea to hire your car from the airport.  Summer is Kefalonia’s busiest time, when maximum temperatures are in the high 20s, but come autumn the sea is usually still quite warm, so if you’re looking for a deal this might be when to travel. 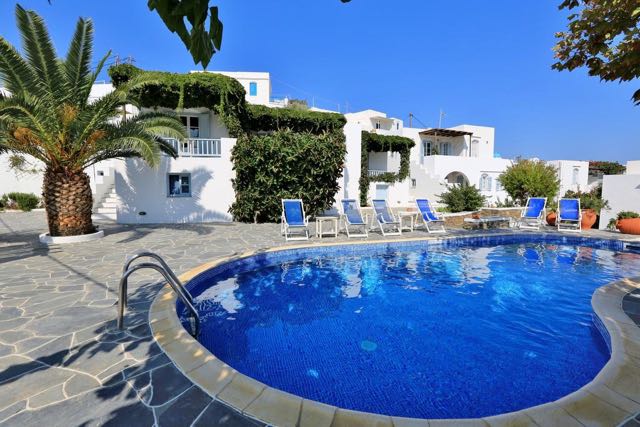 An Island Escape
If you’re looking for those wonderful white sugar cube buildings of the Cyclades then the Petali Village Hotel is perfect for you.  And it’s on Sifnos, which is one of the smallest and most unspoiled islands in the group.  There are just 20 rooms, including eight suites – which are single storey villas, all with white tiled floors and marble bathrooms, pale wood furnishings and luxurious linens. Rooms start from around £75 per night.

On the western edge of the Cyclades, Sifnos is one of the quieter, and yet most enchanting islands in the group. There aren’t many large beach resorts, instead there’s a string of villages with olive terraces surrounding them, and almond groves, an abundance of wildflowers and classic cubist Cycladic architecture. Sifnos doesn’t have an airport, so you can only arrive by ferry, which you can catch daily from Athens or from one of the other islands in the group.  Milos and Athens are the closest airports, but Milos isn’t an international airport so you’d probably end up changing in Athens anyway. The average maximum temperatures here get close to 30°C during summer, and it’s still above 20°C in May September and October.

Head to the Mountains
If you fancy something cooler try the Aristi Mountain Resort, a chic hotel converted from a collection of traditional stone buildings. The mountain views are beautiful and peaceful, there’s a cosy bar for chilly evenings, an impressive fireplace in the main lounge and a spa with an indoor pool, hot tub and sauna.  Their restaurant grows a lot of what it serves in the garden.  There are 18 rooms, starting from around £100 per night.

Epirus hasn’t really taken off as a tourist destination yet, but it’s got excellent infrastructure and it’s beautifully perched on the Ionian Sea.  Away from the coast, Epirus is also where you’ll find Vikos Gorge (as far as the Guinness Book of Records is concerned it’s the world’s deepest canyon), the rugged peaks of the Pindus Mountains and the 48 wonderfully rustic stone villages of the Zagori region. Epirus has two airports: Ioannina, which is a domestic airport with flights to Athens, and Prevaza/ Aktion, which is used for charter flights during the summer. You can also catch a bus from Athens, or arrive by ferry. 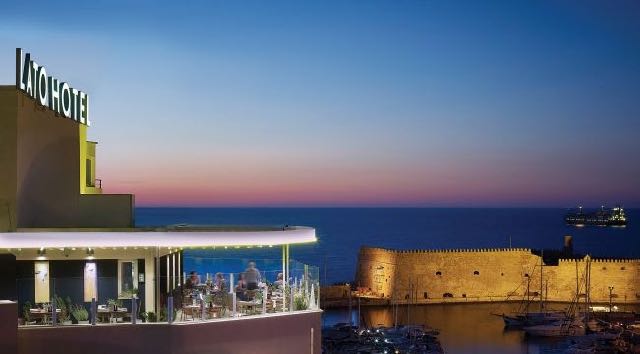 For Fun! (on a budget)
The Lato Hotel is one of Crete’s more modern, designer hotels, with contemporary lines and trendy, minimalist living spaces. It’s also quite big, with around 80 rooms and suites – some with balconies and amazing sea views – three restaurants, a gym and a spa.  Rooms start from around £75 per night.

The Lato Hotel is in Crete’s largest city, Heraklion, which is a modern, densely populated place with a lively city centre and a nightlife – and evening life – which buzzes. You’re also close to a good selection of beaches and some of the island’s main historic treasures.  The climate here is Mediterranean with hot, sunny summers and mild winters.  In July and August you can expect the average maximum temperatures up around 30°C, and only cooling off to around 19°C in the evenings. Heraklion has its own international airport just four kilometres from the city which has incoming flights from Gatwick, Luton, Edinburgh, Bristol, Manchester, Newcastle, Leeds and Stansted.  Heraklion is also a very busy ferry port.