Who's the new Mrs Tiggywinkle? / CountryWives

Some of you may know that recently I was deeply upset because some vile scumbags had stolen all the clothes and toys and bric a brac I had been storing in my garage. I was going to sell them at the Steam Fair at Fawley for the Thai Children’s Trust, an organisation I have been associated with for some years. I was desolate and very nearly cancelled my pitch as I only had three weeks to entirely restock. But then I thought , BPG pull yourself together. Why should these monsters beat me. So I started all over again.

I wrote a post about my feelings and and the CountryWives came to my rescue. Not only did they publish the post immediately they also donated a whacking dollop of dosh! But, dear readers… they also touched the hearts of the generous people who read CW! I have to say a HUGE thank you to you all. I have been overwhelmed by the kindness of everyone. I have had messages from far and wide and have spent the whole of the last three weeks collecting clothes. 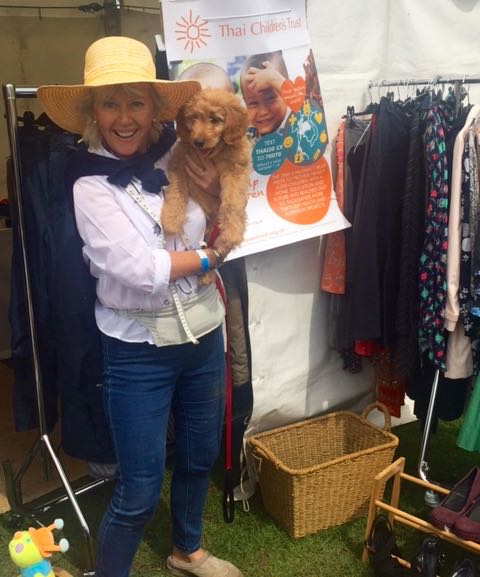 My team of brilliant helpers, including OG (Other Granny), have spent the last four days at Fawley Vintage Steam Fair which is held in the grounds of Sir William and Lady McAlpine’s home. My team have been selling, selling and selling and we hit our target by the end of the fair and will be able to send a really sizeable cheque to the Thai Children’s Trust. Money goes a long way in Thailand. It is a huge achievement especially as most of the items were one or two pounds and that meant a lot of banter or spiel as I believe they call it in the trade. We sold more than a hundred and fifty shirts – every single one lovingly washed and ironed by myself. My home looked like Mrs Tiggywinkle’s for the past three weeks.

I have to say a very big personal thank you to Grace who brought clothes all the way from Sussex and Annabel who rallied her team of girlfriends and supplied me with a whole car load. And rails. And a dummy. The latter, which sadly we didn’t have room for. Mind you, the clothes were going off the rails so fast I think she would have spent most of her time undressed!

Annabel and her lovely husband came up to visit me on my pitch and brought the fluffy Kobi, who is just the most adorable puppy ever… I wanted to take him home!

Thank you country wives…. I couldn’t have done it without you.