The art of being dumped / CountryWives

The hubby and youngest unmarried trotted off to find a good place to be ‘dumped’. To be ‘dumped’ is the act of being ditched, sacked or fired by your loved one! My husband thinks it’s imperative to find the right location with the perfect atmosphere for every occasion. This is his specialist subject and he’s jolly good at it too.

I am not sure if having been dumped, the atmosphere will continue to feel so ‘warm and welcoming’ but I do understand the concept. The hubby’s concerned about the aesthetics but actually a practice run may well defuse the final mortal blow. Surprisingly, he could have hit on something here. Genius stroke of strategic planning. The ‘dumpee’ should be familiar with the chosen location to give him an added sense of security.

The youngest and his father strolled up to the Gore Hotel. There was no need to venture too far on this first recce. They sat at the bar and ordered drinks. There was a socking great big pillar in their way. This wouldn’t do at all. They moved further up the bar. Neither of them were enjoying the stools as they were unable to lean on the bar due to the large protruding foot rails. So which elbow to rest on, whilst listening to ‘the charges’, was a moot point.

They decided to try a cosy corner which had a leather tub chair. The trouble was, with this set up, the sofa facing the tub chair happened to be substantially lower. Should the ‘defendant’ be a foot higher than the ‘judge’? There was a sofa in the window which was absolutely useless for their mission. It would be ridiculous to sit side by side while one of you is sacked by the other. The armchairs were so far apart it wasn’t possible to lean back looking nonchalant. One had to sit on the very edge of the seat to hear properly. You might not catch the prosecutor’s ‘closing statement’. The tables were square which the hubby deemed very ‘unfriendly’. He wished they’d been circular.

The youngest unmarried was concerned if he should be sitting at a 45° angle or would ‘face on’ be better? It’s probably better to look mildly engaged in what’s being said at ‘the summing up’. 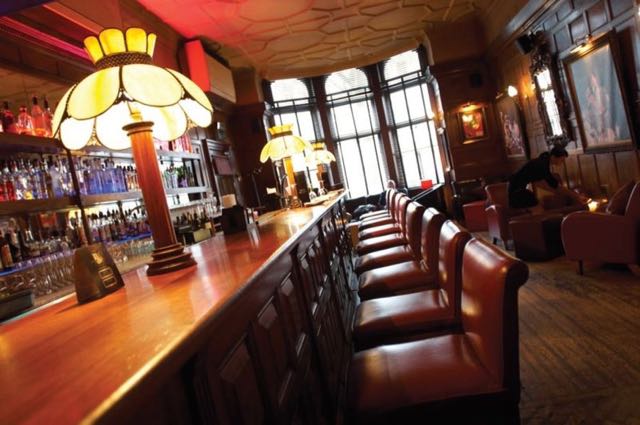 They returned to the bar to give it another go. Maybe they hadn’t given it the full benefit of the doubt? The bar may have hidden depths? The hubby immediately felt boxed in and claustrophobic in his tight corner, whereas the son was facing the window and was encouraged by his own feelings of calm acceptance. They swapped. Now the son felt anxious, like a caged animal. My youngest was interested to know the official line on this …which one of them should be feeling like the ‘caged animal’? Surely not the one getting sacked, didn’t they have enough to put up with?

The tactical withdrawal, the banishment into exile, had to be handled seamlessly. He would leave his card behind the bar. Marvellous, all sorted! Now he just needs to wait for his summons to appear.