The Chapel in the Woods by Susan Louineau - Annabel & Grace 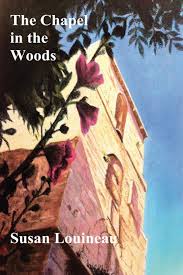 I returned from holiday having read only half of this book on my Kindle and I have to admit that I put everything on hold including the inevitable pile of washing, re-stocking of the fridge, reading the post etc as I honestly could not put this book down.

It is the story of Diana Lescure, a young mother who moves with her family to the tiny village of Saint Gabriel in the depths of France, it is clear that not all is well amongst its inhabitants. As she settles into her country idyll she uncovers a menace that has shrouded the villagers for generations. Through a twelfth century monk and a British agent in World War Two, the story of a secret society unfolds. A story of suspense, intrigue, history and French village life.

The three main characters, whose individual stories, weave the history of this French village are all so different and the author manages brilliantly to keep their stories separate until like a puzzle, it all comes together as the last pieces are placed in their correct positions.

I am hoping that this book is the first of many for this author, Susan Louineau, as she is such an accomplished storyteller. Her descriptions of French village life both in the modern day, during the second world war and in the 12th century are so realistic one can almost feel the seasons change, taste the food and drink and watch the lives unfold as if one was there.

The Chapel in the Woods