The Jungle: An Inspirational Play About The Calais Refugees

I absolutely love the theatre whether it be a drama, a comedy or a musical. Often I go and I think how could I ever see anything better than this. I have been lucky enough to recently see Hamilton, Tina the Musical, Ferryman and Lieutenant of Inishmore. They were all different but brilliant in their own way. However last week I went to see the play, The Jungle, at the Playhouse Northumberland Avenue, London and I, together with my son and husband, were literally blown away.

The Telegraph critic, Dominic Cavendish, said it better than anyone, “Everyone who can see this, should try to. It’s the most important play in the West End. It’s also the most “non West End” experience in theatreland.”

You enter the theatre expecting the normal red plush velvet seats but you are transported to the Calais refugee camp. The theatre has had a complete makeover with an Afghan makeshift kitchen in the corner, long tables and bench seating in the main area of the stalls, a shavings strewn floor and actors mingling with the audience. It represents one corner of the Calais refugee camp but it is the story of the whole camp.

How it came about:

The creative team have surpassed themselves. The play is the writing debut of Joe Murphy and Joe Robertson, two young men who worked in the camps for seven months and had first-hand experience of life there. They created a pop-up theatre called “Good Chance” between 2015 and 2016. From this came the inspiration for the Jungle play.

They handed the baton over to Director, Stephen Daldry, and designer Miriam Buether who took it up and have given the words life which successfully sends a message to each and every audience member. 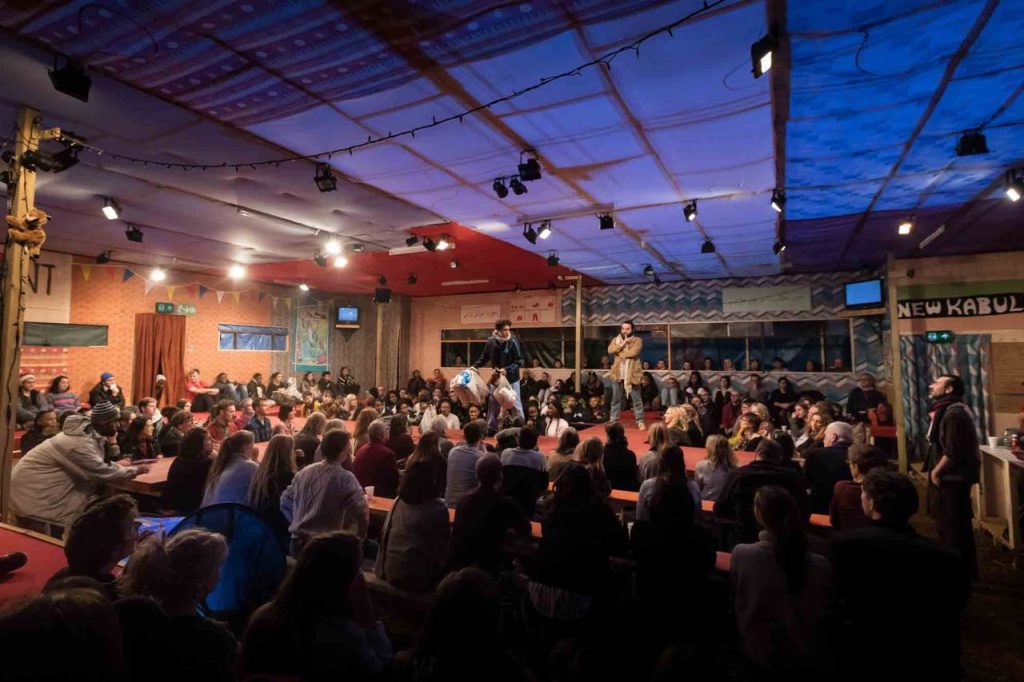 The 22 actors, come from all around the world. The dialogue is often in their own tongue. However the feelings are so strong the audience does not need to know the exact meaning. The refugees share their stories whilst dealing with the anxiety and anger in the camp.

The TV screens show real footage and the sound includes the overhead planes and the trains which thunder past close-by and it all goes to make you feel you are there and it is happening in real time. There is a gorgeous little Syrian girl (played by a roster of girls) who represents the completely confused children that have made the trek and have lost their parents. When the camp was bulldozed down over 300 children disappeared – child trafficking etc.

What is to be done?

However you feel about the refugees you cannot help but be moved by these actors and the stories. The desperation, horror and fear comes across in waves. We have no concept what it must feel like to be homeless, stateless and hated. The volunteers played by British actors are to be commended for trying to help in impossible circumstances. They are loved and hated in equal measures.
Dominic Cavendish completed his review with the words, “The West End just got a heart transplant.’

You come out of the theatre emotionally drained but also uplifted at the sight every member of the audience, young and old, queuing to donate much needed cash to Help Refugees.

However what can be done long term to solve the refugee crisis?

The Jungle is on now until 3rd November 2018 at The Playhouse Theatre, Northumberland Avenue, London. Tickets from £15 – click HERE for more info.