If there is one thing we all know about Corfu it’s that, in the 1930’s, it was the home of the Durrell family. Corfu and the Durrells have become synonymous, helped of course by the recent TV series. However like all good stories, the facts may have stood in the way at times. So when I saw this book, The Durrells of Corfu by Michael Haag, I thought it was time to read the real story behind this fascinating family.

The truth about Corfu’s eccentric expat family was much darker than the comic myth. So if you don’t want to break the magical spell that this family have cast over us, then do not read on! However if you want to read the real story about how the Durrells came to be in Corfu and where they all went after war broke out, then this easy to read book will tell you all. 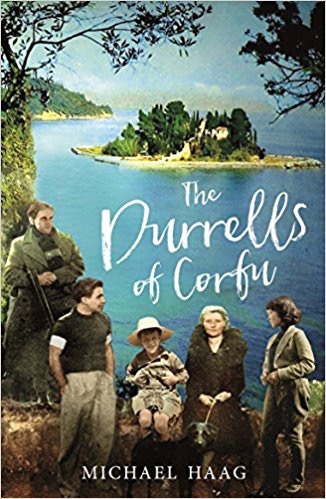 There has been some criticism that a lot of the information in this book may have been taken from Gerald’s own book, My Family and Other Animals, and the one book that Margo, his only sister, wrote. However that may be the case but this book takes us from their births to their deaths and includes some new material. There are some great photographs included in the book and the characters match up well to the TV actors and actresses in the recent series. Maybe Keeley Hawes is a little too attractive for Louisa Durrell but a little artistic license on TV is acceptable.

When you read this book you will understand why the children were somewhat feral and why Louisa used to hit the “demon drink” as Gerry sensitively describes it.

Having visited several of the places that are mentioned in the book it made me want to visit the rest, as this story captures the spirit of Corfu which lives on, particularly on the North East coast. It recalls the genuine characters they encountered on Corfu – Theodore the biologist, the taxi driver Spiro Halikiopoulos and the prisoner Kosti – as well as the visit of American writer Henry Miller. Finally it also recounts Larry’s and Margo’s last minute escapes from Corfu just before war broke out.

I read My Family and Other Animals as a schoolgirl but never read The Alexandria Quartet by Lawrence Durrell and so this will be next summer’s holiday read when I visit Corfu again, an island that I have fallen in love with.

Grace and I recently visited Corfu and had a brilliant time on this sleepy Greek island. Read all about it here