I am a fervent supporter of the NHS, particularly as it has come to mine and, more recently, my grandchildren’s aid, many times. This is Going to Hurt by Adam Kay is a frank record of his time as a junior doctor between the years of 2004 and 2010. 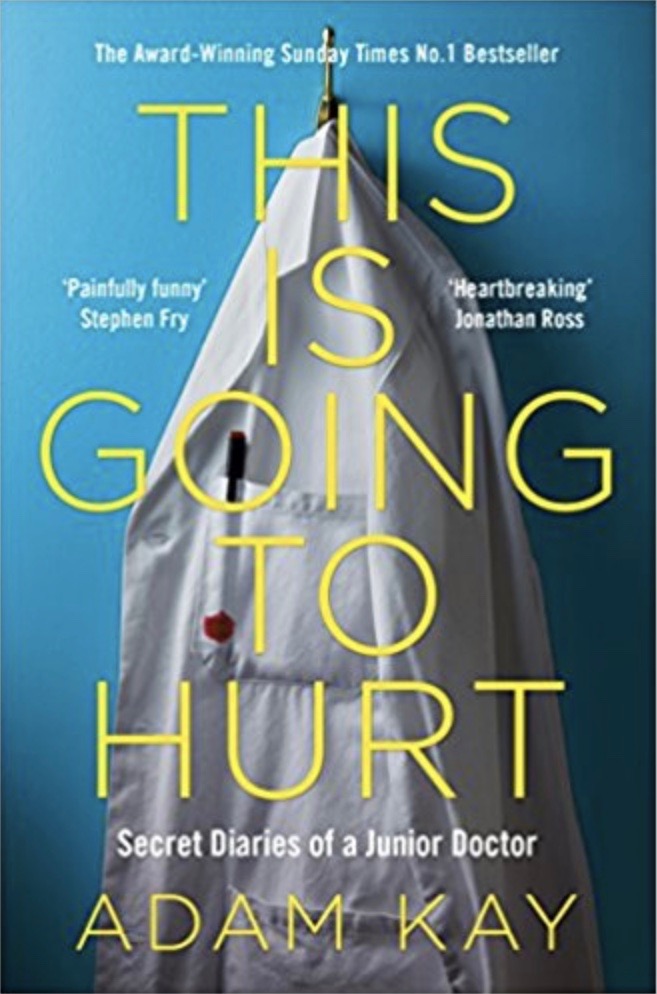 His diary is his memoir of being on the front line of the NHS. He writes of the joy, pain and very often the frustration at all the bureaucracy.

It has been a long time since I have laughed out loud and conversely cried at all the things he had to deal with. The account of his first six months in Surgery brought tears to my eyes and probably those too of his patients. He was assigned to the Urology department and found himself dealing with the removal of foreign objects from various intimate orifices. This was known as the Eiffel Syndrome because patients would say ‘I fell, Doctor, I fell’.

There was the man who put a lit candle in his penis, hoping he would have the best birthday ever, instead he spent it in hospital having his burns treated! I was amazed by some of the objects secreted, toilet brushes, a string of Christmas lights, an engagement ring in a kinder egg, to name but a few.

After his time in surgery he opted to specialise in Obstetrics and Gynaecology. He was told it would be the least depressing, difficult and revolting option. Hopefully there would also be many happy outcomes.

Although written with immense humour you cannot avoid the stark descriptions of the endless nights on call and the resulting unbearable tiredness. All this is done without praise or support from his seniors. It seems that memories of being a struggling junior doctor are soon forgotten when you reach the dizzy heights of being a Consultant.

Adam’s social life disappeared and friends were let down by his inability to attend family functions. Helen, his then partner, seems to have become resigned to this way of life.

In 2010 Adam left the NHS and being a doctor, as a result of a traumatic episode when a baby he was delivering died and he had to perform an emergency hysterectomy. It seems this was the straw that broke the camel’s back.

Although there is much to laugh at Kay raises many questions through his pain, anger and frustration. The bureaucracy experience he sees as “cruel and pointless”. There is no regard for the toll of the life and death situations experienced by the doctors and all the hospital staff.

He writes: “Nobody joins the NHS looking for plaudits or expecting a gold star or a biscuit every time they do a good job, but you’d think it might be basic psychology (and common sense) to occasionally acknowledge, if not reward, good behaviour to get the most out of your staff.”

Now I have read this book I can only applaud all those who work against the odds in the NHS. I know I shall always be eternally grateful to them.

Have you seen our best 10 summer reads?