Tilos... a tiny island in the Dikonese / CountryWives 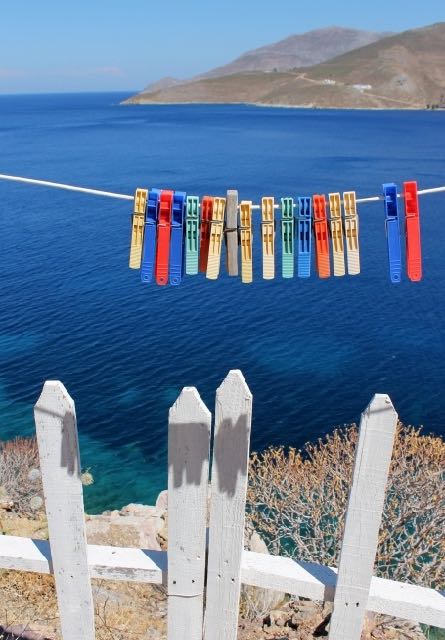 My friend and I took the very excellent Blue Star Ferry, not to be confused with the White Star Line ( Titanic ) from Kos to Tilos. It is a three hour journey. We were absolutely gobsmacked at the sheer luxury of the ferry – we had expected a rusting old hulk with sad chairs and smelly loos. Not a bit of it. As we stood, dwarfed by this ocean liner, and watched its enormous mouth opening for the cars, we were amazed to see it was absolutely empty. Not a car or lorry or van in sight. There were only seven people, including us, waiting to board. The burly Greek sailors beckoned us on no sooner than the ramp had hit the edge of the quay. No one worries about health and safety here. It’s not roll on roll off, it’s jump on jump off. We were onto the ramp and steaming away within five minutes. God help you if you are late. We climbed up the carpeted stairs (there was an escalator too) and found ourselves in a huge saloon drawing room with TV, bar and wifi. Apparently there is also an a la carte dining room where you may feast on four courses for the princely sum of fourteen euros per head!

We decided to go into one of the large drawing rooms so we could also nip out on deck. There were only two other passengers in the whole room. Two blonde Dutch girls who were obviously hitting the gin. The giggles got louder and louder, much to our amusement. The staff outnumbered the passengers and I wondered how on earth they could make money. Later on I was told the freight kept the line going, the passengers were incidental. Well if we were incidental they looked after us very well. I will be incidental any day! We sat down plugged in our iPads in and had a nice cup of tea! Only joking… of course we joined the Dutch girls. 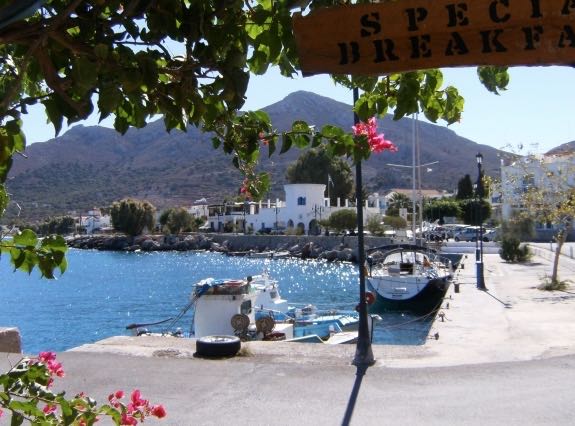 There was only one stop before Tilos. Watching the ramp go up and down was hair raising. It seems to be a game to see how quickly the crew can get people on and off. When we arrived at Tilos we walked off the boat into the arms of our friends who whisked us to the nearest bar which was less than three minutes away. More drinks…

It was soooooo Shirley Valentine. We walked up a steep slope and there, in the middle under the fairy lit trees, was a throbbing bar with locals drinking and smoking and discussing the news and views and scandals of the day. It was way past midnight. Cats in various states of pregnancy lay dormant under the tables. The birds had long since gone to bed. Did we want to eat our hosts asked? No no we had had something on the boat… we were quite happy to drink the night away by that time!

On we went to another bar overlooking the beach. We sat under the moon in the humid night drinking white wine and eating baked corn and peanuts. The bar was full. The sea was lapping at our feet and the moon was a crescent shape. Old favourites drifted out of ancient speakers tied together with gaffer tape – Sinatra, Leonard Cohen. All I could think of was Mamma Mia, Shirley Valentine and the gorgeous Anthony Quinn.

Our hosts have lovely romantic story.  They have run away together, having been sweethearts many years ago. It’s so fantastic to see them enjoying their second chance! Bless them, they were putting us up in their little rented house overlooking the sea. My friend and I slept on the floor with a fan squeaking happily all night blowing tepid air over us. Before going to bed however we were bidden to see the stars. I see stars regularly. Usually when I get hit – playing rugby with my grandson. But these stars were worth the rather alarming climb up to the roof on a rickety 1930s spiral staircase. The sea was darkest blue, a crescent moon shone over Turkey in the distance and twinkling lights marked the curve of the bay. As we cast our eyes upwards, the stars were brilliant white casting a milky muslin over the sky. Well that’s what it looks like if you have a cataract growing! 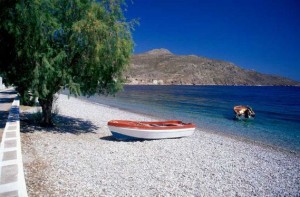 We slept soundly and in the morning my friend and I crept past our sleeping hosts. The sea looked so inviting. There are pebbles on the seabed so getting into the sea on a bed of potato size pebbles is NOT comfortable. Having broken my ankle when I fell off the sofa earlier this year I was keen not to break it again, so I edged my way into the water on my bottom.  Not very elegant… but I don’t care. I wasn’t trying to impress anyone. Oh my goodness the bliss of the cool clear water. It was so refreshing… and so buoyant you can just float on your back, look at your toes and see Turkey in the distance! 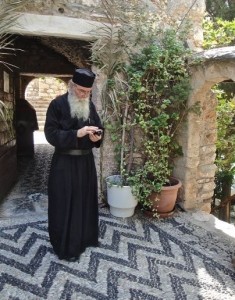 After a Greek breakfast (a cup of coffee) we set off to see as much of the island as possible by car. First we climbed high up in the mountains to see an abandoned monastery. The road (courtesy of the EEC) has an excellent surface, not a pothole to be seen. It climbs high up into jagged mountains devoid of any vegetation. As the class A road winds round the mountains there are terrifying drops down to the sea. The road is painfully narrow so if anyone is faint of heart, or you don’t like roller coasters, I suggest you shut your eyes. The monastery is nestled into the mountain and has commanding views. Fresh water springs from a tap in the garden and it is cool and clean. A very ancient orthodox Greek priest still lives there and he seemed pleased to see us. Thousands of years ago mini elephants about the size of Great Danes lived on the island. I love the idea of hordes of Baby Barbars trunk to tail foraging for food in the one fertile valley and splashing in the sea at weekends!

Next on to have lunch – another perilous journey snaking down the mountainside. One of the delights of visiting friends in foreign lands is the local knowledge one gleans – what to eat where, the nicest place to swim etc etc. Lunch was at a family owned restaurant where they serve the best calamaris on the island. The fishing boat is moored opposite the restaurant and the owner’s sons were playing with fishing rods and bread just as their forefathers had done before them. There was excitement as the smallest child caught a fish about two inches long which was wiggling unhappily in the child’s hand.  With the wisdom of a sage, the older boy took the fish and threw it back. Whether it survived the tight clasp and waving of the smaller child I don’t know but the thought was there – let it grow bigger and it will feed more people!

The calamaris arrived with freshly made Greek salad and chips – delicious. Lulled by the joy of simple fresh food and gentle people, our friends took us to see one of the biggest wastes of money in the EEC. About 750 people live on Tilos but the EEC, in their wisdom, has built the most magnificent road costing thousands of pounds cutting through the mountains to the new dump. Yes I said dump. Also a state of the art shredder was built (as yet to be used) to dispose of the “not very much waste” which 750 people create and the rubbish has been left to rot or blow away into the sea, causing a health hazard to the fishing industry and humans. Not withstanding this unbelievable waste of money, a new school has also been built for the children but the road leading to it does not have safety bars on it so the school cannot be opened. The long road to the dump has safety bars! Why don’t they take them off and put them on the school road you ask me. I found this stupidity UNBELIEVABLE. Ask any head teacher what they could do with a hundredth of what has been spent here on this tiny island. Oh yes, and one more gem… useful signs of ‘beware cows’ are strategically placed along the road but Tilos doesn’t have any cattle … only goats! 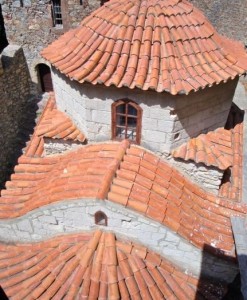 I loved Tilos. It ticks all the boxes for me. Small, bohemian, unspoilt. Crystal clear water, plenty of eateries. And best of all, dear friends on the island. We caught our big ferry back to Kos the next day. There were more people getting on this time and we joined the unholy rush to leap on the tailgate moments after it had crashed onto the quay. We scampered up the carpeted stairs and onto the aft deck just in time to wave goodbye to our friends.  A Syrian lady standing next to me smile and I smiled back. “What is this island called?” she asked, as she restrained her kids from climbing on the bars. “Tilos ” I replied ” Where are you going?” “To meet my husband” she said. I hope she makes it. She has such a hard journey ahead of her…