To Kill the President by Sam Bourne: Book review / CountryWives 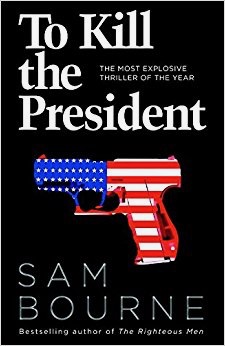 If any of you did not know, Sam Bourne, the author of To Kill the President, is the pseudonym of Jonathan Freedland, renowned and award winning journalist and broadcaster. In To Kill the President, his latest conspiracy thriller, a White House legal aide spots a plot to murder a recently elected controversialist president who, though never named, seems familiar.

The book opens with the President having a stand-off, via Twitter, with a North Korean leader and demanding to launch the nuclear warheads – sound familiar? A worrying fictional plot as it too closely resembles current real life and where we could end up. From this comes the realisation of how unstable and unpredictable this fictional President is so it demands action and now the title of this book, To Kill the President, kicks in.

The conspiracy is spotted by Maggie Costello, an Irish-born diplomat who featured in Bourne’s The Last Testament (2007) and The Chosen One (2010). Maggie served under the last administration and agreed to stay on though is now hating herself for serving a President she believes should not be in power. However she too has her own secret which is concealed until the final pages of the book.

If you want a page-turning thriller that is well thought out and written but will give you goose bumps when you compare this story to what is currently going on in the U.S. I do not think Trump will be sending Mr. Freedland a.k.a. Sam Bourne a Christmas card however, apparently, Trump does not read books. I don’t think anyone in his inner circle would dare to tell him about this one and experience his wrath!

I read this book as Trump and Kim Jong-Un were shaking their imaginary sabres at each other so my timing could not have been better, or worse depending on how you look at it. I believe Jonathan Freedland followed the US election and so had an inside view of the then candidate so his book was written with this insight and a brilliant imagination or maybe a brilliant prediction of what could happen.

Let us hope it does not come to this and the fiction in this book does not become reality.

To Kill the President is published by HarpersCollins and is available from Amazon HERE.