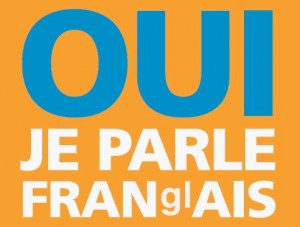 When we arrived in France in January 2007 I spoke very little French and my husband John just about managed “deux bieres, s’il vous plait”.  We bought Michel Thomas’ learning French CDs (excellent apart from the irritating American woman) and threw ourselves in at the deep end to learn the language.  I was determined not to be one of those Brits who thought if you spoke slowly, patronisingly and loudly, the world would understand you. As an Army brat I was good at German but we quickly discovered that didn’t go down too well here.  Having paid a fortune for a removal company to decamp from Marlow, Buckinghamshire, we then spent some of our first summer at “vide greniers” or attic emptying days (ie car boot sales) in our local villages getting rid of all the crap we had packed and moved and didn’t need any more.  It was educational, particularly with limited language ability, but at one of them we met a Frenchman who was interested in why we had decided to move to France.  He embarrassed us as he spoke perfect English.  I pointed out that I noticed there were some British people who had decided to live in the Lot, quite a few Dutch and Belgians but not many Germans.  “Non,” he replied with a wry grin “they left after 1945”.

Sometimes the language difficulty has caused quite a lot of hilarity.  J and I both love cooking and we eat dinner with our guests, all part of the French bed and breakfast experience and we have learnt French quickly but sometimes incorrectly.  One evening I was recounting the fact that it is possible to canoe down some of the many stunning rivers near here, where you see swooping eagles and the dart of blue as kingfishers dash along the river edge.  I knew the French for an oar was “rame” so I naturally translated the word for rowing into my particular style of Franglais and told them we had spent a wonderful day “rammoner sur la riviere” which, it turned out, meant we had been chimney sweeping down the river!

However, my best Franglais error was a couple of years ago in the hardware store, which was full of local French farmers and builders.  We wanted some wood preservative for the beams (putre).  I stood there boldly and asked “Je voudrais un preservative pour la put de mon mari”.   There was a roar of approval from the locals and they all slapped John heartily on the back and stuck their thumbs in the air.  We were chuffed that they seemed to approve we were renovating an old French house (because of inheritance law here they are often left to rot).  The French love our efforts to speak their language and call our errors “charmante” – not sure that little error was quite so charmante – I have since discovered that I asked for a condom for my husband’s prostitute. 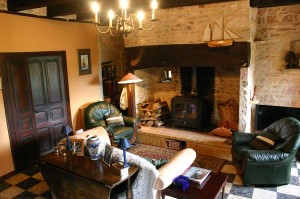 Well, back to the present. 2013 is well and truly here – detox and diet started (again!) and the list of preparations for redecoration of the sitting room underway, which is pretty extensive: the beamed ceilings are high and the walls covered with soft padding and fabric over the rose and honey coloured stones.  We think the fabric has been there for at least 30 years and I am reluctant to discover how deep the layer of dead spiders and dust might be underneath.  It is liveable with but the cats have delighted in climbing the fabric and using it to sharpen their claws, the strong sun has faded some parts and I have decided it has to change. Then the floor needs stripping and the windows treating with varnish. We also need to insulate and soundproof between the beams which are ten foot high above the floor. All this is much to my husband’s reluctance as I have volunteered him to be Head of DIY (again!). On that happy note I would like to wish everyone bonne annee et bonne sante for 2013.