Last week over coffee a friend admitted she had booked a holiday in Turkey, almost forgetting that the beautiful port town she was extremely excited about re-visiting was part of a country where the current political situation wasn’t entirely stable. She was embarrassed about not recognising recent news events as applying to the destinations she’d been considering. But when we started looking into it together it seems like her instinct was sound. There’s only really one region of Turkey – close to the border with Syria – which the Foreign Office recommends avoiding.

My friend is returning to a much-loved and fairly regularly visited hotel, and the news from the owners seemed to be the usual conversation about new cafes and restaurants she should try out and what’s been happening in the lives of regular staff members. There’s been no mention of politics, because for most of us that is only a part of our day to day lives, and in the case of my friend’s much appreciated hotel proprietor, his main concern is his business and his livelihood.  So, we decided that in continuing to support him as usual she was doing the right thing.

Hopefully this introduction won’t have put you off making a similar choice.  We do need to keep our eyes open about the risk of travel, but there’s a danger to any travel – and a danger to staying indoors too! We just need to keep our wits about us, and get as much good advice as we can.  Which is what my friend and I did in asking for recommendations from the Hotel Guru, because Turkey is a fantastic place to visit!

Istanbul has historically been the meeting place between the east and the west – and that’s not changed. Spread across both sides of the Bosphorus, it straddles two continents! Istanbul’s history is one of dramatic sieges and conquests, and of immense trading wealth. Much of the city’s glorious past is still visible and visitable. Amongst the famous domes of mosques and graceful Orthodox churches visitors can see the Roman catacombs, Byzantine battlements and Ottoman palaces. Start at the Hagia Sophia, then see some of the places mentioned, like the Blue Mosque, and the Topkapi and Dolmabahçe Palaces, and, of course the Grand Bazaar. 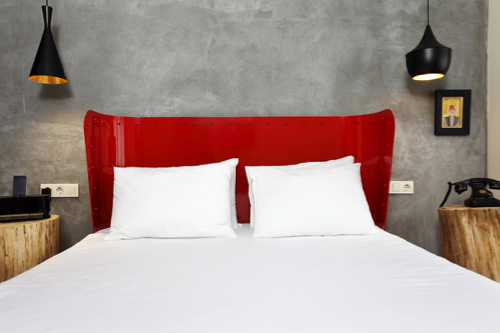 Sub Karakoy is in a great location between the old and new cities of Istanbul, allowing for easy forays into both. The decor is modern and bright, yet focussed on your comfort, rather than just looking cool. Doubles start from around £90 per night and it’s worth looking into having a full Turkish breakfast delivered to your room every morning.

Practical Details: You can fly direct to Istanbul Airport from Heathrow, Gatwick, Birmingham, Edinburgh, Manchester or Stansted. It takes about three and a half hours. Istanbul is very hot in summer so April and May, or September through November are probably the best times to visit as far as the weather is concerned.

Kaş: Ancient and Modern Treasures on the Turkish Rivera

Kaş is a colourful little city on the Turkish Riviera in southernmost Turkey. It is surrounded by ancient archaeological treasures and has some lovely little cafes, bars and restaurants.  Its beaches aren’t sandy, but its rocky coves and rock shelves offer great opportunities for ocean swimming and underwater adventures, and it’s also popular with walkers, bikers and paragliders. Furthermore, Kaş is one of the best places to shop on the Turkish Riviera – head to the long market, also known as ‘slippery street’, for a shopping experience famously high on quality and low on tourist tat.

On a quiet peninsula just outside town, the Deniz Feneri Lighthouse is a really remarkable, memorable place to stay with elegant interiors and incredible views. Each of the rooms, suites and villas has quaint, individual details. but the sense of luxury permeates everywhere, from private pools (with certain suites) to the traditional terrace restaurant. You’re just ten minutes from Kaş, and double rooms start from around £130 per night.

Practical Details: Antalya Airport is the largest in the region and you can fly here year round from Gatwick, Manchester and Glasgow airport, and seasonally from other UK airports. It’s about three and a half hours from Kaş, though. Dalaman Airport is smaller, but closer – you can only fly into Dalaman between April and October, when Kaş is at its busiest. In season you can fly direct from Gatwick, Stansted, Luton, Manchester, Birmingham, Bristol, Edinburgh and Glasgow. Kaş is busy during the peak summer months, so if you can travel at the beginning or end of the season you’ll still have plenty of sunshine but no crowds.

Cappadocia’s wondrous lunar landscape was created around 70 million years ago by a massive volcanic eruption, but it was the threat of a different kind of violence which lead people to dig the area’s famous cave villages into the basalt. The volcanic soil makes the area rich and fertile, so plenty of people competed for this land. People burrowed their cities underground, cutting into the rock and hollowing out around thirty underground cities and around a thousand churches. Creating a landscape, and a place, like no other on earth. 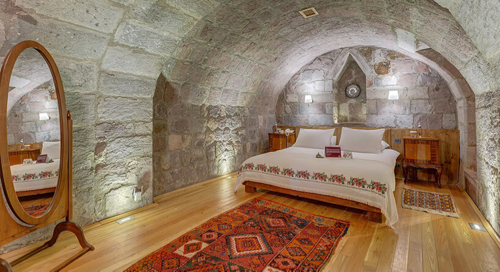 The Taskonaklar Rocky Palace is one of Cappadocia’s wonderful cave hotels, built right into the rock face, but with plenty of large windows, so you’ll not feel too subterranean. The decor is traditional, with beautiful killim rugs and open fireplaces, and there are lovely terraces with stunning views. But the feeling is of a boutique hotel rather than an old-fashioned one, and the facilities are excellent. Rooms start from around £80 per night.

Practical Details: Most people travelling to Cappadocia come via Istanbul, then fly on to Kayseri Erkilet Airport or Nevşehir Kapadokya Airport, depending on exactly where you’re staying. It’s also possible to travel from Istanbul by train. Cappadocia is a pretty incredible place to visit any time of year, but most of us will find July and August a bit too hot.

Alaçatı: Peacefully Turkish on the Mediterranean

Considering how beautiful it is, close to a long, flat, turquoise, Aegean bay, its cobbled streets and traditional, bougainvillea-clad buildings in ivory stone, Alaçatı is relatively undiscovered. It’s popular with Turks trying to escape Bodrum’s busy-ness, and windsurfers love it, as do those fascinated by the history of the Turkish Mediterranean – Alaçatı was part of Greece until the 1920s – but it’s only since the ‘90s that it’s been on the radar of the arty crowds, who were followed by the smart set. However, despite the hip visitors, Alaçatı still has a friendly, village feel and you’ve got a good chance of finding a stretch of sand to yourself.

The BeyEvi Hotel is a chic, romantic spot at the peaceful end of Alaçatı’s main street. The hotel’s chic interiors and boutique-hotel-style decorations are set against whitewashed walls, and there are just 15 elegant rooms sharing the lovely pool and living spaces. The restaurant is also very good. Rooms start from around £115 per night.

Practical Details: Alaçatı is about 45 minutes drive from Izmir Airport, which can be reached year round from Stansted, and almost all year round from Gatwick, Birmingham and Manchester. During the summer season you can fly from many more UK airports. There’s a shuttle bus, but the transfer companies offer good rates. The best times to visit are probably the shoulder seasons, so April and May and September and October.

Between Antalya and Fethiye, right up against three kilometres worth of exceptionally idyllic beach, Çıralı is a friendly, relaxed hamlet. Çıralı’s beach is known for being more than just pristine perfection, it is also an important nesting site for endangered Loggerhead Turtles. And seeing these great, slow creatures burying their eggs patiently in the sand, or the tiny hatchlings scuttle towards the water, are both life affirming, bucket-list-worthy moments. You’re also just a 15 minute stroll along the beach from the ancient ruins of Olympos, and close to the ‘Burning Rocks’, a rocky area on the slopes of Mt. Olympos which is almost constantly aflame – fed by the gas which seeps from the ground and spontaneously combusts when it meets the air. This spectacle is fantastic seen at night, though possibly a little apocalyptic! So, this is a peaceful, yet memorable, destination.

Olympos Lodge is a 14 room hotel set within peacock-filled gardens right beside a private beach. The decor in the rooms, suites and shared living spaces is creamy and un-fussy, with wooden floors and fireplaces. The Lycian Way passes right by the hotel. Rooms start from around £170 per night.

Practical Details: Antalya Airport is about an hour and a half from Çıralı. Several UK carriers will fly you there between April and October, but Thomas Cook flies there year round from Gatwick, Manchester and Glasgow. If you want to see the baby turtles hatch the best time to try is late August/early September, and if you want to try and catch the Mamas laying their eggs then you’re looking for a full moon in September or October.

For more travel recommendations around the world, click here