TV series in the New Year not to be missed / CountryWives

I have found a way to love this time of year as there are so many really great TV series that have already started and there are others that are in the pipeline. This is the time of year when your bank balance has taken a hit, the weather is foul, the evenings are dark and we are either dieting or partaking in the annual ritual of Dry January (or damp January as my daughter has re-branded it i.e. only occasionally drinking). So here is my list of TV series I will be watching – they are currently all available on Catch Up or Netflix. 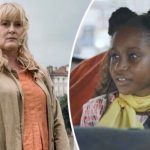 Kiri: Channel 4 This 4-part series follows dedicated social worker Miriam Grayson (played by Sarah Lancashire). Miriam’s life is thrown into chaos after nine-year-old Kiri (Felicia Mukasa) goes missing during an unsupervised visit with her grandparents that she organised. A nationwide search ensues, throwing Miriam into the media spotlight with the blame resting on her shoulders.It is a desperate situation shot through with guilt and human frailty. Kiri is a fictional story inspired by creator Jack Thorne’s (writer ofHarry Potter and the Cursed Child) mother and her job as a carer. 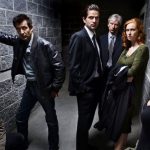 Spiral: BBC Four This much admired French series returns for its sixth series. It is a French television police procedural and legal drama series set in Paris. The show follows the lives and work of Paris police officers and the lawyers and judges who work at the Palais de Justice. Subtitles but it is worth it. 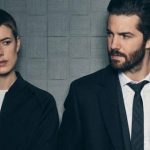 Hard Sun: BBC One This six-part series is a pre-apocalyptic crime show set in contemporary London. The premise of Hard Sun is that the end of the world is nigh, and we have five years left to cry in. The name comes from the Bowie song and it is played at the end of the first episode. It stars Jim Sturgess and Agyness Deyn, the model, and is written by Neil Cross who brought us Luther.At the drama’s nub is a moral quandary: should the imminent extermination of humanity be hushed up by the deep state, or a matter of public knowledge? It is far-fetched but strangely gripping. 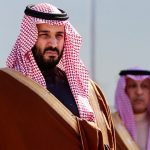 House of Saud, A Family at War: BBC Two This 3-part series is worth watching as it is an eye-opening documentary that lifts the lid on Saudi Arabia and terrorism. It looks at the challenges facing the new Crown Prince of Saudi Arabia, 32-year-old Mohammed bin Salman, who has pledged to transform the country. It does not leave you feeling hopeful however I have only watched episode 1. 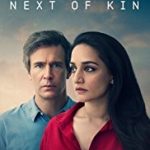 Next of Kin: ITV This six-part series is written and created by husband and wife team Paul Rutman (Indian Summers, Vera) and Natasha Narayan. Emmy Award winner and Golden Globe nominee, Archie Panjabi (The Good Wife, The Fall), and renowned actor, Jack Davenport (Pirates of the Caribbean, Smash), star in this fast-paced family thriller. Whip-smart GP Mona Shirani lives a charmed life at the heart of a loving family living in London. But she is left grief-stricken when her much-loved brother is brutally murdered whilst working for a medical charity overseas. As the death brings buried family secrets to light, Mona is drawn deep into a tangle of betrayal, conspiracy and murder. One way or another, she must find a way of protecting herself, her family and her career as they are all put at risk… 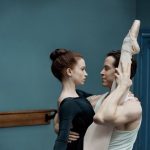 Flesh and Bone: Amazon TV  is an American drama television mini-series. The founder and temperamental artistic director of the American Ballet Company, Paul Grayson (Ben Daniels), is determined to make it rank among the world’s best artistic institutions. As the company’s ageing prima ballerina, Kiira (Irina Dvorovenko) struggles with an injury, Grayson believes the company’s saving grace is Claire Robbins (Sarah Hay), a ballet dancer with a troubled past, whose inner torment drives her in compelling, unforeseeable ways. The series explores the dysfunction and glamour of the ballet world. All 22 members of the dancing cast are professionals, including Sasha Radetesky and Irina Dvorovenko (both former, high-ranking members of American Ballet Theatre). They warm up like real dancers and wander half naked around the building of the fictional American Ballet Company with the unmistakable mix of casual immodesty and mannered grace that are the physical trademark of their profession. 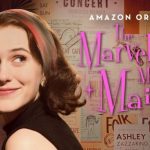 The Marvellous Mrs. Maisel: Amazon  In 1958 New York, Midge Maisel’s life is on track- husband, kids, and elegant Yom Kippur dinners in their Upper West Side apartment. But when her life takes a surprise turn, she has to quickly decide what else she’s good at – and going from housewife to stand-up comic is a wild choice to everyone but her. The Marvelous Mrs. Maisel is written and directed by Amy Sherman-Palladino (Gilmore Girls) and has already won a Golden Globe. It is quirky and fun, a great change from all the thrillers on TV! 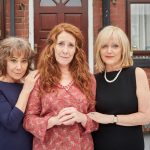 Girlfriends: ITV  Miranda Richardson, Zoë Wannamaker and Phyllis Logan (Downton Abbey) star in this drama, which centres on a trio of friends who are facing the responsibilities that come with being a modern woman of a certain age. Girlfriends is a six-part series written by Kay Mellor – the creator of Fat Friends, In the Club and current BBC series Love, Lies and Records. After the dramatic and sudden death of her husband Micky, Linda rekindles her friendship with childhood pals Sue and Gail. It is light entertainment with quite a few plot twists. 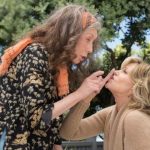 Grace and Frankie: Netflix Season 4 is available to download on 19th January. I love this series as so much of it reminds me of Grace, Ellie and I. The main thrust of Season 4’s first six episodes is unabashed openness: Grace and Frankie have started their own business, manufacturing vibrators for the elderly, and they’re not going to let social hang-ups about sex or ageist business practices get in their way. This series Frineds star, Lisa Kudrow, joins the cast as a recurring character.  Lisa Kudrow will play Grace’s manicurist Sheree. This is make you laugh out loud comedy.