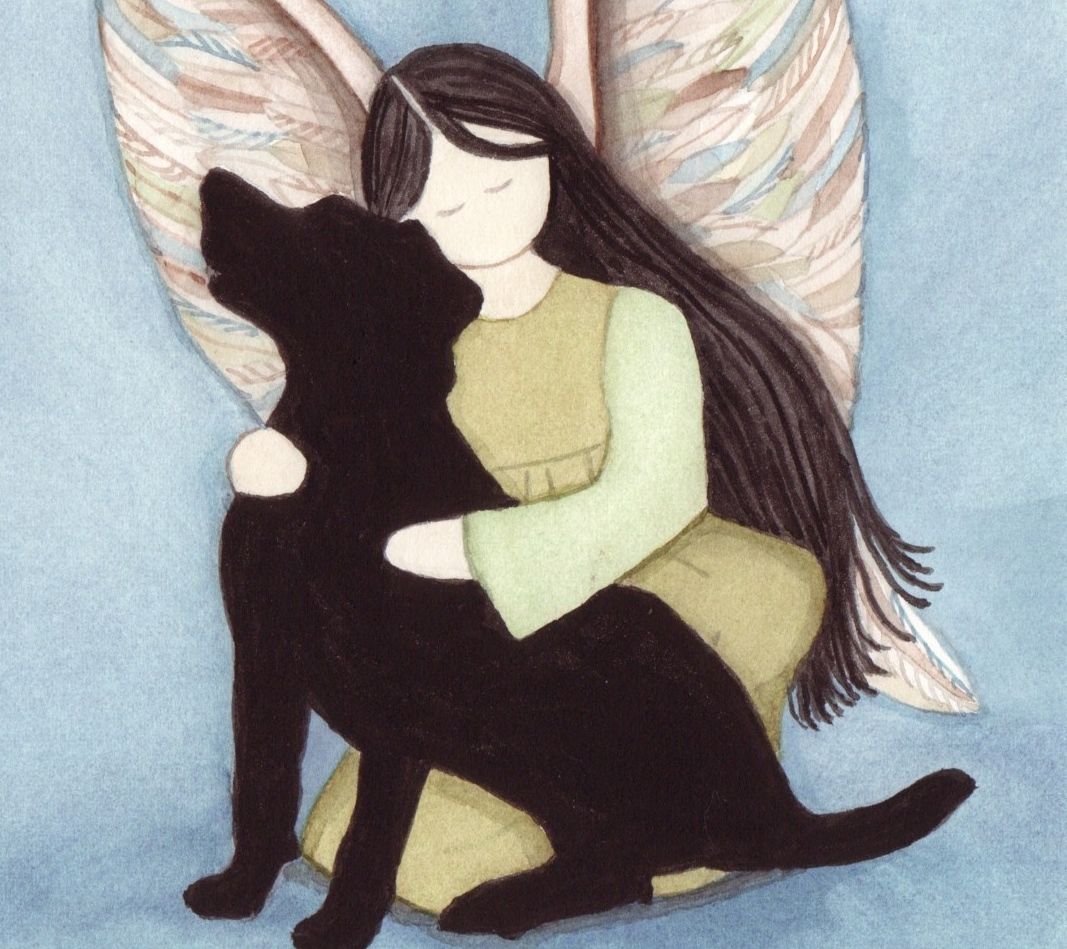 I am a cat lover. I make no excuses. I also love dogs and since our ancient old Labrador, Wooster, died we have vowed not to get another, as it is too heart breaking when they shuffle off to the great hunting ground in the sky. I do miss his thumping tail, tho’.

However, Bertie and Jeeves (what else could I call them!), our French cats, are very funny little characters and have similar traits to dogs, or maybe it’s the way we have bought them up.

They were born in the barn next door (they have never learnt to shut a door) and I heard plaintive mewing one day when I was in the garden. Jean-Marie, the newly married farmer, admitted there was a family of kittens and would we like some? Yes, I said, knowing that at the time, Wooster would not be with us for very much longer as he was nearly fifteen and a half, which is a pretty good age for a Labrador. Jean-Marie appeared with several flea and tick ridden little scraps of fluff and we took two. I didn’t like to ask what happened to the others. 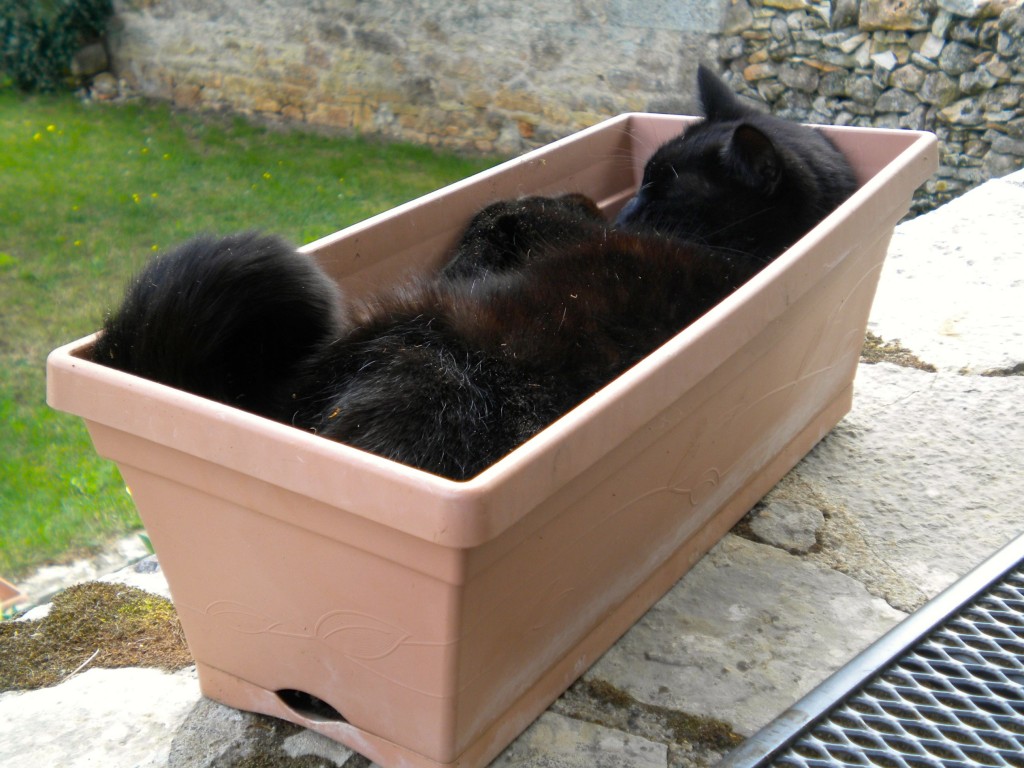 Bertie and Jeeves were immediately deloused and have turned into very smart, handsome black cats. They are now seven years old and as I type are both fast asleep, curled up into fat, content bundles on our bed.

I do get a bit cross with the French attitude to animals in these rural locations. They don’t seem to bother getting them neutered and consequently, when Zoe, the next door sheepdog, is in season, we have constant howling all through the night from her potential suitors. It’s lucky she has the speed of light when out tending the sheep…

One of our other neighbours has two female cats and last year, between them, they had seventeen kittens within the space of two weeks. When I asked what she would do about finding homes for them all she just shrugged her Gallic shoulders and said the ones that didn’t go to homes would be taken out to the Causse (wild scrubland) and they would have to fend for themselves. Harrumph!!

There is also the reverse attitude to domestic pets here. Sometimes you see little dogs being carried around supermarkets in the trolley or a special doggie bag (no pun intended!), head one end and and a special slot for the tail, the other. There is absolutely no problem with taking a dog into a restaurant in France, which I have to admit I rather approve of. 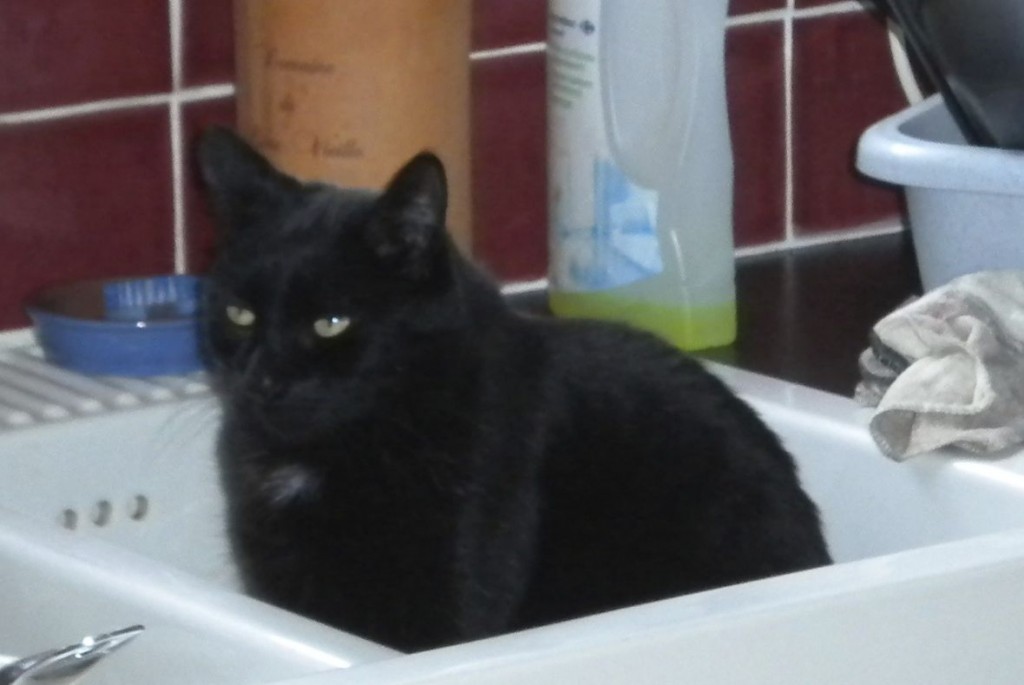 Anyway, back to our two spoilt little farm cats. When we arrive back in the car they rush out to greet us, purring and miaowing with either delight at seeing us or anger that we have dared to leave them for a couple of hours. We then get escorted back to the house, tripped up several times while they weave affectionately between our legs and then get a baleful stare if we don’t immediately fill up their bowls with biscuits!

They have cost us a fortune in vet fees as Jeeves nearly died due to anaemia (caused by immunity to the anti-flea /tick / mite product) and was saved by a blood transfusion from his brother. Bertie had urinary problems which blocked his whole system and now has to have a special food!

Bertie is slightly aloof and very graceful and Jeeves is dispracxic and tends to fall off things or miss his footing. He also likes to hide behind doors and jump out at us as we pass and then pretend he is so cool as he swaggers off.

I look forward to lazing by the pool for the next few days as our season has slowed down and we have wonderful weather. Bliss!