What drew me to this book, The Underground Railroad by Colson Whitehead? Maybe it was the fact that it was Winner of the Pullitzer Prize for Fiction 2017.  Or was it that Barack Obama had reviewed it as “Terrific”. Whatever it was I am so glad that I did buy it as it is an incredible read. It is a magnificent, wrenching, thrilling tour de force chronicling a young slave’s adventures as she makes a desperate bid for freedom in the antebellum South.

Cora is a slave on a cotton plantation an existence made worse because she is also an outcast among her fellow Africans. Her mother is no longer with her and she is approaching womanhood when she knows life will get even worse. So when she is approached by a fellow slave, Caesar, who has recently arrived from Virginia, and he tells her about the Underground Railroad, Cora takes the momentous decision to accompany him on his escape to the North. 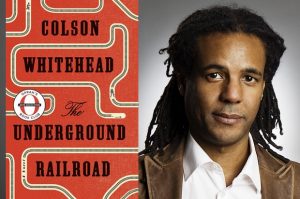 Of course there was no such railroad in the real sense but there was a network of secret routes and safe houses established in the United States during the early-to-mid 19th century, and used by African-American slaves to escape into free states and Canada with the aid of abolitionists and allies who were sympathetic to their cause. One estimate suggests that by 1850, 100,000 slaves had escaped via the “Railroad”. In this book though Colson Whitehead gives the Underground Railroad a physical form of a dilapidated box-car pulled by a steam locomotive, picking up fugitives wherever it can.

Cora, following her escape, is hunted by a ruthless slave-catcher, Ridgeway, who is obsessed by Cora as he is with her mother who has escaped his clutches for years.

The book pulls no punches and it paints a very vivid picture of life on a cotton plantation and even more evocatively life as a slave on the run. This must be the story of so many Africans who were brought to the US to work as slaves, where human life was given no worth or any respect. It is a gut-wrenching story however it is also a story of the strength of human spirit.

I finished this book as the Neo-Nazi, White Supremacist, Klu Klux Klan riots began in Charlottesville which really made me think that we may have come a long way on the road to a truly integrated world but there is still a lot of work to be done.

Click HERE to go through to Amazon to order.