Was booking the family tickets to see Skyfall yesterday – like the rest of the UK, we always go and see the new Bond films as soon as they come out – when I thought I would ask my son if he’d like to come and watch a film I have been desperate to see for weeks. I wasn’t sure he’d be up for sub-titles, but he was. Untouchable has quickly been and gone on the major cinema chains’ schedules, even though it has won so many awards. But, thanks to Google, we tracked a showing down at a tiny little cinema in Chichester, where my son was at least forty years younger than any of the other audience.  This place has a charm all of its own – from the OAP at the bar serving glasses of wine (at 4.30pm in the afternoon) and scaldingly hot paper cups of tea, to the wonderful atmosphere of the small auditorium with its oak beams.

This huge box office hit  tells the story of the unlikely friendship between Philippe, a wealthy quadriplegic, and Driss, a young and poor man from the ghettos, who is hired as his live-in carer – despite its sober premis, it really is a very funny film and both son and I found ourselves roaring with laughter. Not everyone fell in love with the film though – when it was released in the UK in September this year, The Independent called it “a third rate buddy movie that hardly understands its own condescension” but I couldn’t disagree more with that review. Sure, it has the same unlikely theme as Driving Miss Daisy, but I loved that film too.  It made me laugh and it made me cry. Doesn’t get much better in my book! 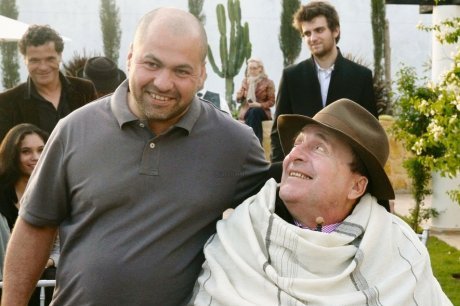 Philippe Pozzo di Borgo with Abdel Sellou, the real life people who the film plot was based on.