Vegans - A Really Helpful Guide On What To Cook For Them

Thanks to Emily Hillier, aged 21, who is currently studying at the University of Exeter and who is a vegan (and a totally charming young woman). As veganism is currently a hot topic she has kindly written her tips on what to do if you invite a vegan to your house and are puzzled as to what to feed them…

What to feed a vegan?

Have you ever been faced with the daunting prospect of hosting a vegan? Finding yourself anxiously pacing the fresh fruit and veg aisles at the supermarket – green veg and quinoa for tea anyone?

Perhaps this article is the helping hand you need… steering you away from rabbit food and towards a meal you will be proud to serve to your guests.

Arguably most importantly, try to focus not on what you can’t eat. Instead adopt a more positive mindset: how can you adapt family favourites? For example, spaghetti bolognese with vegan mince, aubergine or lentils, or a mixture of vegetables and pulses. Or, what new meals might you get to try by trying out someone else’s diet? Try to think of it as an experiment rather than a chore. Perhaps you’ve never had a coconut and chickpea curry, or weren’t aware of the delicious and healthier alternatives there are to a meat-eater’s staple diet.

I have listed below some simple yet delicious suggestions for meals, as well as staples you might want to buy in, and some shops and websites to have a look at if you really want to push the boat out. 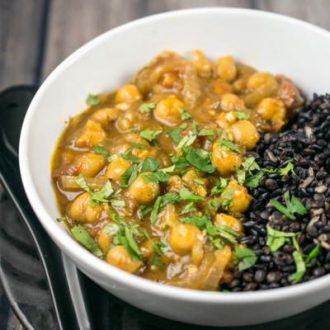 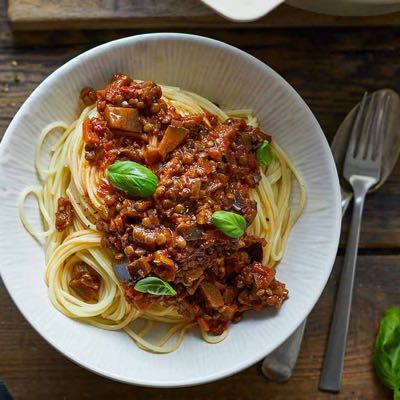 Spaghetti Bolognese with lentils and aubergine
This is a really simple one. Fry your onion and garlic until soft, then add diced aubergine, courgette, mushrooms, carrot and celery. Stir until soft and starting to brown. Then you can continue to make the sauce as normal and serve with pasta. (Make sure it’s dried – fresh pasta contains egg!) Or try the Tesco recipe pictured here.

If a vegan is sprung upon you, other satisfying meal ideas are tomato pasta, or a jacket potato with baked beans. (Sometimes it can be simple!) 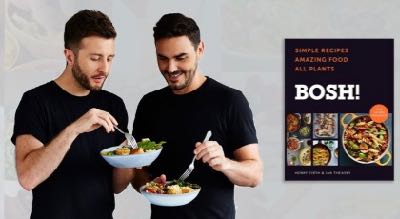 Have a look at Bosh – everything’s completely vegan so you don’t need to worry.  Their cookbook is the fastest selling vegan cookbook ever. Jamie Oliver says “.. over 140 incredibly easy and outrageously tasty all-plants meals…”

Good Housekeeping website has some tasty vegan recipes too – definitely worth a browse. For restaurants, PETA and TheHappyCow are fantastic in finding nearby eateries with a vegan option.

YupItsVegan is an excellent resource for vegan recipes – check out these yummy looking avocado and edamame potstickers. 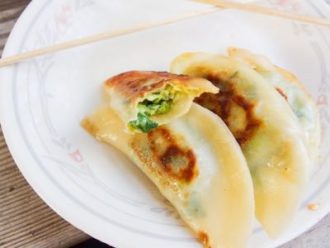 Staples to buy in

A milk alternative:
Alongside most of the UK, a cup of tea is my morning ritual, so I wasn’t prepared to give that up. Soya milk is a reasonably mild tasting milk alternative, and can be bought for as little as 55p in the Long-Life section of most supermarkets. Rice milk has a slightly sweeter taste, and the nut milks unsurprisingly have a mild nutty flavour. It’s normally down to individual preference, and so I would advice asking your guest if they have a preference.

Cereals:
Honey is the biggest thing that catches people out. Vegans do not eat honey, it’s an animal product and so is treated the same way as milk and eggs etc. Many granolas and healthier cereals constrain honey as a ‘healthier’ natural sweetener, so beware of this!
Similarly, many chocolate cereals contain milk or milk powder. I would recommend the plainer cereals (Weetabix, Cornflakes etc) as a safe bet.

Alcohol:
Another thing many people don’t realise is that alcohol contains animal products. These include ale, scrumpy cider, wine and Aperol.  Wine is clarified (called fining), using fining agents such as gelatine or milk proteins. The internet will normally help you find a vegan wine at your supermarket, but if in doubt, stick to spirits. How could you go wrong with a G&T?

Shops:
There will always be a fresh and LongLife ‘FreeFrom’ section at your local supermarket, I often find inspiration for meals in there! However, be careful  that you still check the ingredients, as often FreeFrom may mean gluten free and still contain milk and eggs! Holland and Barrett has plenty of vegan alternatives to choose from, such as vegan mince or meat alternatives.

Veganism is a fast growing movement, and so it’s not unlikely that you will at some point have to host or dine with one! Hopefully this guide will take some of the fear out of it and reinstate the fun of having guests – whatever their food preferences!