Wasps: How To Rid Your Alfresco Eating Area Of These Striped Fiends

With this glorious weather come the inevitable influx of wasps. I suppose they are always there but, because we are eating outside more and all doors and windows are open, we just come into contact with them more this year. Of course there are other members of the insect family that drive us mad in this heat, hornets, mosquitoes and ants. We have had the flying ant day when ants grow wings and fly up to mingle with other ants from other nests and thus procreate. This only happens one day a year for each ant and it needs perfect weather conditions to happen. So it may not happen the same day throughout the country. However it solves the problem on any in-breeding as they are not procreating with other members of their nest who they are probably related to. Isn’t nature clever?

Then there are the hornets, well you can’t miss them and I have already had Fred round to exterminate an hornet’s nest, very successfully. Hornets are the largest of the eusocial (still members of the EU?!) wasps – fascinating name and now that Brexit is happening this must be their last summer as they must find another EU country to bed down in or expect to have to apply for a visa to re-enter our island! 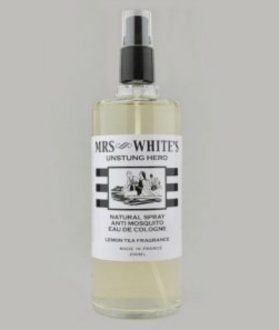 Mosquitoes are horrendous this year – there has to be a downside to having such wonderful sunshine. I am a big advocate of Mrs White’s Unstung Hero (EdC) Mosquitoes Repellent which has a delicious lemon tea fragrance so it is not repellent to one’s nose but is repellent to those nasty mossies! Mrs. White has many other insect repellents, for spiders, moths, and flies which I am sure are also excellent.

Finally wasps which seem to bring out the worst in people. Instead of standing very still and ignoring them as the experts tell us we should, we turn into windmills with arms flailing around. If that doesn’t work we than take off running around the garden as if we can outrun or even outwit a wasp! I know we all feel that wasps are not necessary in the human food chain but unless you can identify the wasp that you are about to kill from the 100s of varieties in existence you may be killing one of the few that can cross pollinate flowers. They may not be as efficient at it as the bee but in the case of figs the Agaonidae (fig wasps) are the only pollinators of nearly 1000 species of figs and thus are crucial to the survival of their host plants. Still it is unlikely that the wasp about to sting you is one of those but I had to recount one positive story about this insect before I tell you how to rid your alfresco dining area of them. 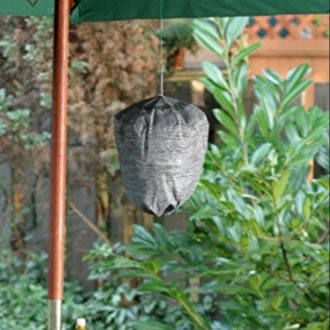 Many years ago we realised that we had a wasp nest and so we called in Fred the Wasp man (he kills most insects if required) and it was he that put me onto the Waspinator. The Waspinator can be bought from Amazon for the princely sum of £8.99 for two. It is a grey patterned cloth bag and you stuff it with paper and then hang it near to where you eat. Fred explained that as the wasps are territorial and will rarely nest near other nests. So as they fly over your garden they see the Waspinator and think it is a wasp nest and since it is not one that they belong to they avoid the area. And guess what it works. I don’t see Fred so regularly but he is equally as happy for me. The Waspinator will also dissuade next year’s queens from making trouble in your garden. 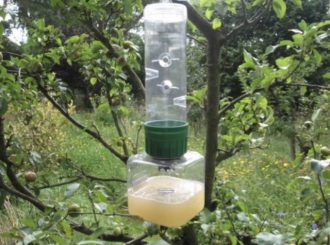 Another lure for wasps is Waspbane. This is particularly good as it traps and kills the scouting wasps very effectively, so none return to alert the rest of the nest to the presence of a sugar source and hence you are less likely to be troubled by a mass visitation. This is more expensive than the Waspinator but once you have bought it you only need to buy the refills.

However it is a small price to pay for this glorious weather!