What to do when Spring has not sprung! / The CountryWives

Since the weather has not exactly lived up to expectation after those 4 days of heatwave, and we are not all enjoying al fresco dinners sipping Rosé wine every night (yet), then we need some entertainment. So I have chosen three things for everyone’s ‘What to do’ list.

Ignore the reviews of the film, The Guernsey Potato Peel Pie and Literary Society, and go see it for yourself. 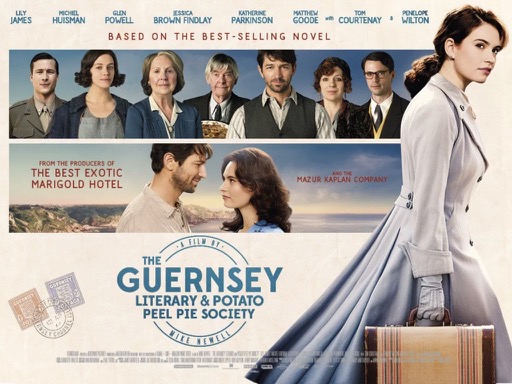 Based on the posthumous novel by Mary Ann Shaffer and her niece Annie Barrows, The Guernsey Literary and Potato Peel Pie Society stars Lily James as Juliet Ashton, a writer on the promotional hustings in 1946 London. With a commission from The Times to write about reading, Juliet decides to visit Guernsey, one of the Channel Islands invaded by the Germans during the war, after receiving a letter from a dishy pig farmer (Michiel Huisman) about the origins of a local book club under the occupation.

Seeing the Germans march up an English High Street is a little eerie as it shows how close the Germans were and what could have been for all of us.

This Mike Newell-directed film (Four Weddings & a Funeral) delves into a picture of Britain in the immediate aftermath of war; a nation trying to savour the lives they’ve been blessed with, while old traumas still continually bubble to the surface.

It is a bit of a tearjerker with Penelope Wilton and Tom Courteney, who are as distinctive as ever, giving solid and emotive performances but worth going to see.

Starting on Sunday, 6th May at 10pm on Channel 4, TABULA RASA, a dark and disturbing psychological thriller from Belgium. When Mie, a young women with amnesia becomes a key suspect in a missing person’s case, she must reconstruct her memories to clear her name. However, her mind fills in the gaps created by the amnesia, meaning the haunting narrative follows not only the past and present, but dreams, hallucinations and nightmares.

While locked up in a psychiatric hospital, Mie is visited by Detective Inspector Wolkers who claims she was the last person seen with Thomas Spectre before he vanished. As a witness and prime suspect, she appears to be the sole key in this mysterious disappearance and Mie can’t be released from the hospital until Thomas is found. In order to solve the puzzle and find Thomas, Mie has to reconstruct her lost memories and find her way back through the dark labyrinth of her recent past. Along the way she encounters shocking revelations about her complex family situation, her relationships and her past. The more she remembers, the more she starts to mistrust not only the people around her but also… herself. Are these new memories real or mere figments of her imagination in a desperate attempt to fill in the blanks?

Season 2 of the Emmy-nominated series “Genius” tells the story behind Pablo Picasso, one of the 20th century’s most influential, controversial, and celebrated artists. Also explored are the muses who inspired him. Starring Antonio Banderas in the titular role, hour long episodes explore how the Spanish-born Picasso’s passion and creativity were inseparably linked to his personal life, which included tumultuous marriages, numerous affairs and constantly shifting political and personal alliances.  It is being shown on National Geographic channel which you have to subscribe to but it is worth it.