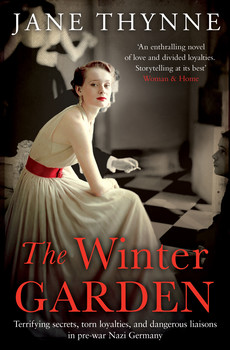 The Winter Garden is the second novel by Jane Thynne featuring actress/spy Clara Vine, who first appeared in ‘Black Roses’, however it is a stand-alone story so you do not need to have read the first book.

Berlin, 1937. The city radiates glamour and ambition. But danger lurks in every shadow…Anna Hansen, a bride-to-be, is a pupil at one of Hitler’s notorious Nazi Bride Schools, where young women are schooled on the art of being an SS officer’s wife. Then, one night, she is brutally murdered and left in the gardens of the school. Her death will be hushed up and her life forgotten. Clara Vine is an actress at Berlin’s famous Ufa studios by day and an undercover British Intelligence agent by night. She knew Anna and is disturbed by news of her death. She cannot understand why someone would want to cover it up, but she soon discovers that Anna’s murder is linked to a far more ominous secret. With the newly abdicated Edward VIII and his wife Wallis set to arrive in Berlin, and the Mitford sisters dazzling on the social scene, Clara must work in the darkness to find the truth and send it back to London. It is a dangerous path she treads, and it will take everything she has to survive…

I love a good spy thriller and this one was brilliant and kept me captivated from start to finish. Even though this is a work of fiction it is clearly well researched and as the reader you feel as if you are involved in the lives of senior Nazi officials and everything that is written appears plausible. Berlin glows with glamour and so many of the British seem to be drawn into the belief that such people could not possibly be plotting to invade the rest of Europe. Clara Vine is a very likeable character with just the right amount of vulnerability and naivety to make her believable. The descriptions of Berlin and Munich in the pre-war build up are intoxicating as one understands the Germans love of all things glamorous however they live under the pending rule of Hitler who makes such demands as the banning of wearing any foreign fashion. Interwoven into the plot is the Brides School which not only is it steeped with Nazi controls it also leaves one feeling that it is so sinister that Hitler wanted everyone to be the same.

What was wonderful was that, having finished The Winter Garden, I found the sequel is available now – A War of Flowers – and this time Clara Vine is in Paris making her latest movie having left Berlin under a cloud. I am definitely smitten with this series of books.