Woman's Hour. We've Got A Surprising Statistic For You

Meet Northern Male. He is a 62 year old divorcee who, although he has written as a journalist and contributor over the years, has never put his thoughts down in writing for an all female audience.

I have a confession to make. I listen to Woman’s Hour.

Now I realise it’s not exactly a revelation some men do this. In fact, the BBC are quietly rather chuffed this female stalwart of the Radio Four schedules attracts a small but dedicated male following which appears to be increasing. Wikipedia tells us that in 2013, the programme had 3.9 million listeners, 14% of which admitted to mostly standing up when they had a widdle and trying not to get it on the mat. But the surprising statistic is that, according to The Spectator in 2016, the percentage of male listeners had increased to a chunky 40%.

So what’s the attraction? Why am I not out earning a living in a butch manner instead of sitting down with a nice cup of Yorkshire tea at 3 minutes past ten on a weekday morning?

Well, being semi-retired now I have more time, my shift job with the police often sees me at home in the mornings and of course there’s Auntie’s podcast and i-player catch up. So there’s every opportunity to delve into the wonderful world of the Female Mind, which of course has been mystifying males ever since Eve told Adam eating apples from the tree of knowledge was fine and this God bloke didn’t know what he was on about. 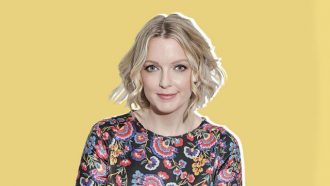 Let’s also not forget the temptation that is ‘Late Night Woman’s Hour’ where trembling male digits grope for the bedside dial to discover ladies talking about such enlightening subjects as female lust, why we lie, the rise of the dating app Tinder and women who use drugs and alcohol. Even presenter Lauren Laverne admitted to raising a Spock-like eyebrow when introducing a topic discussing the sex lives of aliens.

But that was a mere bagatelle compared to when Grauniad journalist Hannah Jane Parkinson dropped the F word whilst discussing social media on the show. R4 listeners across the globe could be found twitching on the floor. Even if that would have steamed up Jenny Murray’s spectacles, it’s not done Laverne’s career any harm. The suits at the Beeb were so impressed, they chose her to deputise for Kirsty Young when the latter recently announced she was taking a break from Desert Island Discs for health reasons (get well soon Kirsty and good luck Lauren).

So I make no apology for giving my feminine side an airing when alone – and before you decide I’m a closet transvestite, I’m most definitely not. Frankly I draw the line at wearing lippy, eye-liner and red nail varnish a la Eddie Izzard (though anyone who can run 43 marathons in 51 days frankly can wear what they damn well like in my book).

Izzard nailed it when he said “Women wear what they want to and so do I”. He has a point. But compared to the Fairer Sex, we men have so little choice. If the aliens were to break off from the aforesaid nookie and beam down into their local M&S store, they’d find 70% of it was dedicated to women’s clothing. The men’s section appears to have been a begrudged afterthought. I digress.

So, I’m a fan of leaning over the fence to see what the other half of humanity are up to – and I can remember exactly how and when this started.

It was 1968. I was 12 years old and had begun to get the notion there was something rather interesting about girls. Not being able to put my finger on it (stop giggling at the back) I made a decision to find out more.

The eureka moment occurred when I discovered a copy of a rather racy female magazine. My mother used to buy a variety of rather staid ladies publications which to my teenage male mind were yawn-inducingly dull (I think you might know the ones I’m referring to). So I’d no idea there were others that were, er, more interesting. Until one day I was dispatched to a friend of my mother’s who lived in the same village and who wanted her cellar whitewashing.

Joyce was an attractive divorcee who dressed with some style and was always friendly to me. She left for work with a wave and an invitation to make myself a cuppa in her kitchen. I was alone. After several hours of painting I got fed up and decided to explore. 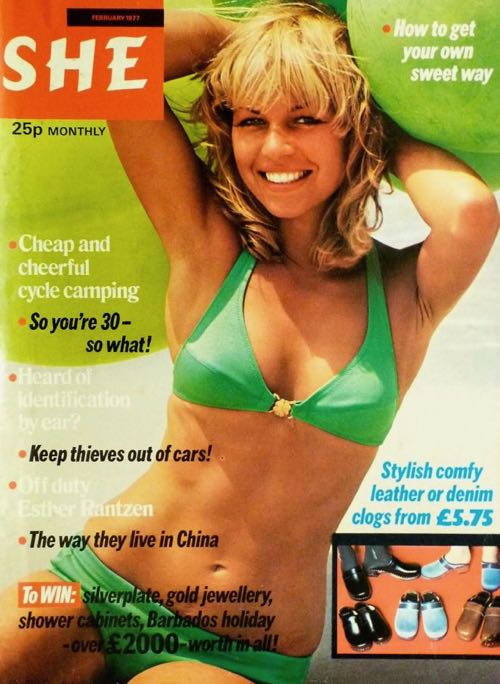 After making myself a mug of builders, I pushed open the living room door in my stained overalls and there on the coffee table was a copy of SHE magazine.

I put my mug down, stood there ( I thought paint stains on her chintz settee might be a giveaway) and flicked through the pages, lingering over the lingerie ads (I still rarely pronounce it laungeray) and pouring over the eye-popping copy. This was what a women’s magazine SHOULD be. Unconventional, risqué, slightly mad and patently a lot of fun.

Unbeknown to me, SHE had been titillating its readers since 1955. The edition I held in my moist palms had a male editor, who was patently more experienced in the ways of the world than its young reader. Thanks to SHE I had discovered a universe of fascinating, sexy women – and I’ve never looked back.

Unfortunately this fine publication was closed in 2011 along with its stable-mate Cosmopolitan (which I also discovered to be equally stimulating). Thankfully Woman’s Hour is still flying the flag for both the intelligent female and the curious male.

So next time you call me on a weekday mid-morning and find I don’t answer, now you know why. I’m looking over the fence again.