I am approaching the first anniversary of the end of my 30-year marriage. I have joined that large amorphous mass that is ‘women on their own’. I have never understood why, floating near this mass of women, there isn’t a similar sized mass of ‘men on their own’, but there isn’t one. I am not unhappy with this state of affairs (not!) and I am not busy scanning dating apps, which is not to say that if a single man appeared in my life who sparked something in me, I wouldn’t want to get to know him.  But I am perfectly happy, right now, among the women. And I certainly don’t want to put myself through the expectation, disappointment and humiliation of meeting a man on line who, in truth, wants a motorbike and a girl of 30. I can’t do anything about that. I am 64.

There is no exact date to mark the end: we decided to part in October 2016, we told our children (grown-up children, 29 and 26, but our children just the same), and we put the house on the market. Christmas was fun, with a bit of a last supper feel to it, family and friends came and went. In January we accepted an offer on the house, and we marked our 30th wedding anniversary at the end of that month – I can’t remember quite how.

There has been no great drama, our marriage just petered out, ran out of energy; with no momentum to move it along any further. The whole process has been pretty civilised and without fuss; the emotion, the heartache we felt has been felt privately, which best describes the 30 years we spent together.

I have felt hugely emotional in the ensuing year: a confusing mixture of heel-kicking joy and freedom, singing aloud and dancing around my new, one-day-to-be great (not quite yet) house, and a sadness which on some days totally engulfs me, with its finger-wagging accusations of failure and guilt. We, he and I, have broken our family apart and for that I am truly sorry. Our children may be adults, but still what we had, our family of four, is now in pieces. Whole and valuable pieces in themselves, but the foursome that was our family, has gone. That’s devastating. 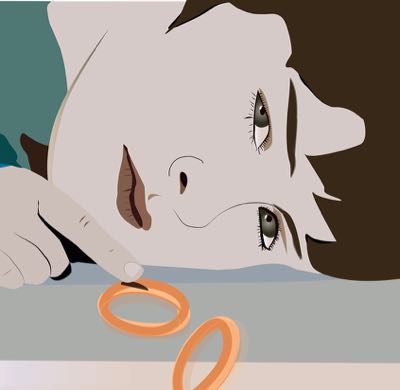 Our parting was a joint decision. After intermittent attempts to fire new life into our marriage – we had relationship counselling, couples therapy, practised new communication techniques – and finally deciding that nothing could save us, we both agreed that it would be better for us to part. He said, as I certainly felt, that he thought it would be better for both of us. I am just not sure that, left to him, we would be where we are today. We would probably have struggled on miserably for another stretch. So in that sense I instigated the parting.

When asked by a counsellor to “Go back to a time when you were first together, when everything was loving and rosy” we couldn’t, because it wasn’t. I don’t blame my husband for the failure of our marriage, any more than I blame myself. I can blame him for many things, and for not being the person I wanted him to be, but that is my problem, not his. He came into our marriage exactly the same man as he left it 30 years later.  I just had hopeless expectations of him. He wasn’t unfaithful, as far as I know, and he wasn’t physically violent. But it’s difficult to live with someone for that long without a love that grows, or at least evolves in some way.

Few of our friends have been surprised at our parting. Most have given me a hug and said they are sorry, and was I all right? (What else can they say?) A couple have said ‘good God, you got that far, couldn’t you have stuck it out? (Obviously not!) One said ‘have you really, really thought about what you are doing?’ Which did annoy me – our parting isn’t something that has been undertaken lightly, and it has been decided over many years. Have I really thought about it? YES – I have. Some people plainly feel discomfited by the end of our marriage, and I can only assume that they are weighing up the pros and cons of their own. If a relationship is dead in the water there have to be some pretty powerful compensations to keep it going.

Have I ever regretted being on my own in the last year? Yes, a couple of times. But they were occasions when I was feeling tired, needy and vulnerable, and we all have to deal with those feelings, married or not. My only regret is that we didn’t do it 10 years ago. But we didn’t. And so was it the right decision for us? Absolutely it was. I’m just getting used to it.