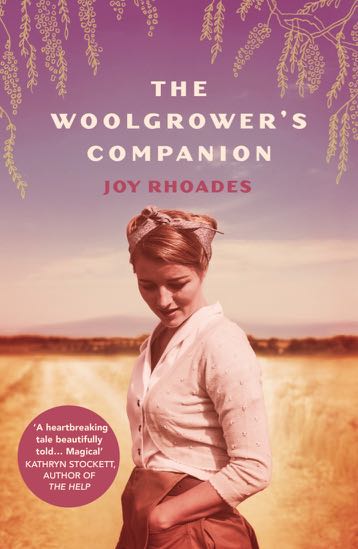 First, let me mention the cover. I took one look at the image of a young woman with her hair bound up in a scarf, standing pensively beneath a wide, open sky, and knew that I was going to love this book! The Woolgrower’s Companion, a debut novel by Joy Rhoades, is an epic, coming-of-age story, set at the end of the second-world war in the harsh Australian outback. Described by its publisher as Captain Corelli’s Mandolin meets The Thorn Birds, the book is also a compelling tale of forbidden love, taking root in an era underpinned by strict, social rules.

The heroine of the story, Kate, undergoes a personal struggle to develop her own moral code, wrought within the crucible of war and impending penury. It seems no coincidence that Kate’s family sheep property is named ‘Amiens’ after the first world-war battle, which has incidentally left her father, an ex-soldier, with psychological scars. Throughout the book, Kate also battles to save the farm – mortgaged to the hilt by her father’s financial mismanagement – from foreclosure by the local bank manager.

‘Brung up proper’ by a socially ambitious mother (who has since died) and her ramrod-straight father, Kate begins the novel as a product of that upbringing – dutiful, naive and slightly prudish. Gradually, she learns to do things her own way, whether that is mustering cattle – her mother disapproved of girls working in the paddocks – or defying the good opinion of her neighbours to help her Aboriginal maid. Part of Kate’s journey is also overcoming her own misjudgements of the people around her. Just occasionally these blunders feel too much like a device to drive the plot, but this is a minor point.

Kate’s relationship with Luca Canali, an Italian prisoner of war drafted into New South Wales to work on the property, shimmers like a golden thread within the narrative of the novel. Despite being newly married, Kate struggles to suppress her physical attraction to Luca with his ‘Greek god’ physique. We feel her pain! He triggers in her a delicious, sexual awakening.

On re-reading the novel, you realise that Luca’s approval or gentle disapproval, at various points of crisis, subtly influences the direction of Kate’s journey. When Kate speaks of her father’s decision to cut off their neighbours’ water supply, thereby breaking a code of good neighbourly conduct, Luca tells her: “This is him, not you.” The slow-burn build-up of their feelings for each other is irresistible, particularly as their relationship takes on an almost spiritual significance.

The novel, however, is also a love song to the great Australian outback, with its exotic bird life and flora, striving, like Kate, to flourish in the arid conditions. With vivid detail, Joy Rhoades summons up black cockatoos in a pepperina tree, a bowerbird in its den, the perfume of the jacaranda tree and the soft scent of wisteria blossom. Equally authentic are the exchanges between the men on the farm, full of ‘orrights’ and ‘struth’ and peppered with macho Aussie humour.

The novel, due to be released this summer, is a delightfully immersive read, transporting us to a world of graziers, intense heat and simmering sexual tension barely contained by social etiquette. What more could you ask for in a summer book?

Joy gave CountryWives an exclusive interview fresh from her book tour in Australia where The Woolgrower’s Companion has become the bestselling debut novel.