The world is full of fantastic places we haven’t been. Even if you’re one of those people who has a huge map marked with pins showing the places you’ve visited – and it appears to be covered in pins.

One of my friends is like this, and she’s the one who put me on to the idea of finding the lesser known spots in the countries you love. She loves Italy, and beside her world map she has a big map of Italy covered in more pins. I think Italy is amazing, but I wax lyrical about so many countries that my favourites change from day to day. Whereas my husband consistently asks about going back to Greece. So asked the Gurus for recommendations and, as usual they didn’t disappoint, coming up with some spots in yet-to-be-discovered Greece which sound absolutely idyllic. Maybe Greece is my favourite too…

Andros – the lesser-known Cycladean Island
Andros is the second largest island in the Cyclades, but you might never have heard of it, it’s so eclipsed by its famous siblings, Santorini and Mykonos. Andros is a lot greener than its siblings. Here freshwater cascades from the rocks in places, allowing for natural forests and generous rivers which feed cities and olive groves. The water has also made this an extremely comfortable place for people to live, and there are thousands of years of history to uncover. The island is covered in a spider’s web of cobbled footpaths, which lead up the hillsides and down into cool valleys, past waterfalls, wildflower meadows and interesting archaeological sites to end up on one of more than a hundred beautiful beaches. 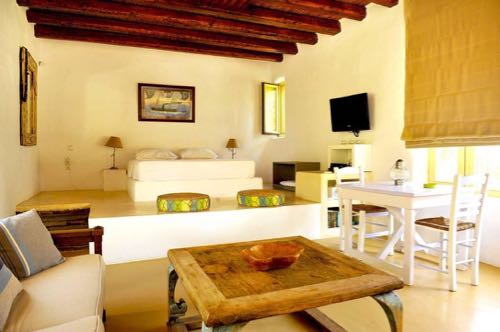 Where to Stay?
Onar is a collection of just ten traditional cottages – sleeping between three and seven people each – and arranged on the edge of a spectacular, secluded coved on the east coast of Andros. You’re on the edge of a protected wetland, away from any hustle or bustle, in a cottage made of local stone and reeds, decorated in simply and stylishly in creamy tones. Breakfast is included in the room rate, which starts from around £150 per night. There is an onsite restaurant, but you can also self-cater.
Practical Details: Andros is the closest island to Athens and many people arrive on the island by ferry from the mainland, which takes about two hours. The nearest airport is on Mykonos, though, and you can easily catch a ferry from there too. The Cyclades are known for their sunshine, and the window when a visit to Andros might appeal because the weather is pretty perfect is big – May through October is lovely.

Pátmos – peace in the Dodecanese
David Bowie loved Pátmos. For some of us that is enough of a recommendation, but this island really draws you in with its beauty and peace. Volcanic islets hover off beautiful blue bays like a continuation of the green hills and mountains on land, the beaches are near perfect and a cave on Pátmos is where the exiled St. John experienced the visions which inspired ‘The Book of Revelations’. The island is still a wonderful place to come to rejuvenate your soul as well as your body. 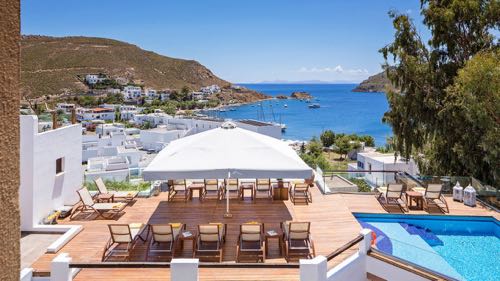 Where to Stay?
The Petra Hotel and Suites is a chic, romantic villa resort with 11 classically elegant rooms and suites – all with private balconies and spectacular sea views. Understated but luxurious, there’s a lovely cafe/ restaurant onsite, sprawling terraces and a beautiful pool. Rooms start from around £170 per night.
Practical Details: Pátmos doesn’t have its own international airport, the closest is on Kos, and you can catch a midday catamaran from there, or catch the ferry from Athens. This is another island with nice weather for a lot of the year, on Pátmos in April you can still expect maximum averages around 18°C, and November is the same. During July and August the maximum averages do go above 30°C, though.

The Peloponnese
Backdrop to many of the highlights of Greek mythology, the beauty of the Peloponnese region remains unspoiled, despite its long history of habitation. For many visitors the ruined Mycenaean palaces, Roman theatres, Venetian fortresses and Byzantine churches are the big draws, though most of them are also within easy reach of a perfect sandy cove or two, and great stretches of rugged, cypress covered coastline. Olympia, Mystra, Mycenae, they’re all here on this peninsula, once part of the Greek mainland, but now cut off by the Corinth canal. 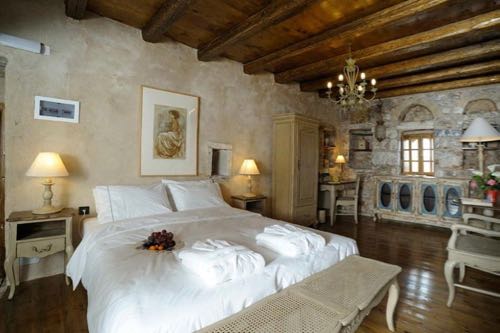 Where to Stay?
The ancient building that Città dei Nicliani has been converted from is a hidden gem on the Mani Peninsula. Lovingly restored, this building now has seven spacious rooms with exposed stone and wood, and antique furnishings. Rooms start from around £65 per night.
Practical Details: The nearest international airport to the Peloponnese region is Athens. From there you can drive, or catch the bus or train – which runs to Patra. The Peloponnese enjoys a Mediterranean climate, meaning dry, hot summers and mild, wet winters. From April the Peloponnese enjoys 13 hours of sunshine a day, but it’s still a bit cool and wet, by May it’s lovely, and it remains that way until about October.

Kea – the ‘other’ Cycladean Island
Kea belongs to the Cyclades, but it’s really close to Attica on the mainland, and looks and feels entirely different to the rest of the group. The landscape varies from a spectacularly craggy coastline, to expanses of dryness, then fertile hills and verdant valleys of orchards and olive groves. The architecture is earthier, and less stark than the rest of the group, more in harmony with the landscape, and there’s a picturesque capital and some lovely seaside towns. The reason you might not have heard of this peaceful isle with its crystal clear waters and rich history, is that it’s a really popular place for Athenians to have a summer villa, and they book it all up quick smart.

Where to Stay?
The Porto Kea Suites is the island’s only international standard resort hotel – a collection of 35 rooms and suites arranged in a charming low-rise village-style complex. Beyond the resort are green views and the beautiful bay at Korissia, the island’s harbour village, and directly across the road is a beautiful beach, with the hotel’s beach bar. Rooms start from around £100 per night.
Practical Details: The only way to reach Kea is by ferry from the port of Lavrion, a small town on the southern side of Attica. The easiest way to get to Lavrion is from the ferry port close to Athens airport. Summers on Kea are warm and sunny, with temperatures within the 25 – 30°C range. Kea stays relatively pleasant in winter as well. Whenever you’re visiting it’s a good idea to pack another layer if you’re walking in the cool, green mountains, the temperature difference might surprise you.

Chania, but not Chania Town
Chania Town is a bit of a distraction for those planning a visit to this region on the westernmost side of Crete. But Chania also has numerous charming towns and villages, and long stretches of peaceful golden beach lined with crystal clear water. Perfect if you want to escape, but might like the option of popping into a big town at some point. In addition to the beautiful old Venetian port with its maze of an Old Town, the Chania region is where you’ll find the Samaria Gorge, Polyrinia – one of the most fortified towns in ancient Greece – and the beaches of Balos, Elafonissi and Sfakia. Definitely hire a car and explore, or plan some nice walks, and try out the traditional restaurants – these smaller towns are rife with wonderful family-run establishments you’ll want to return to again and again. 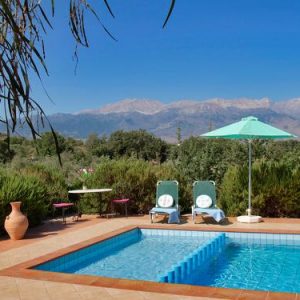 Where to Stay?
The Vamos Traditional Village is a collection of locally owned self-catering accommodation in and around the sleepy village of Vamos. And a shining example of how to do low-impact tourism. Although most of the accommodation here is self-catering there are still hotel comforts available to guests in this collection of rooms, cottages and villas. Some are charming and rustic, some quite grand, with their own private pools. Rooms start from around £70 per night.
Practical Details: Chania Airport is the closest airport to Chania and the Vamos Traditional Village, and there ae a decent range of charter flights from the UK during summer. Crete is at its best in the early or late summer, as, for many of us, the mid-summer weather can be too hot and too sunny.