A War of Flowers / CountryWives 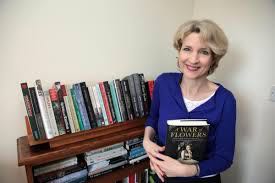 This is the third instalment of the Clara Vine series – the part English, part German actress and spy who is desperately hiding her Jewish heritage whilst living in Berlin. This time the story begins in Paris in 1938, where Clara is making a film, while the threat of war is hanging over Europe and continues onto Berlin and Munich. The author’s knowledge and research of this era is excellent and this time we see the preparation for war through the eyes of the Nazi women and in particular Eva Braun.

It is a standalone story though it does help if you have read the first two books of this series Black Roses and The Winter Garden . It takes you back to that period in history and as always Jane Thynne manages to evoke the feeling of terror and tension that must have followed everyone around. 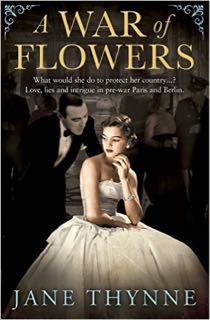 August, 1938. Paris is a city living on its nerves and the threat of war hangs heavy as a distant thunderstorm on a summer’s day.

British actress, Clara Vine, is in Paris to film her latest movie, having left Berlin under a cloud. Joseph Goebbels has become increasingly suspicious that Clara has been mingling in Berlin society and passing snippets of information to her contacts in the British Embassy. It would have been absurd, if it hadn’t also been true…

With war becoming increasingly likely, Clara is approached by an undercover British operative, Guy Hamilton, who asks her to perform a task for her country: to befriend Eva Braun, Hitler’s girlfriend, and to pass on any information she can gather.

Clara knows that to undertake this task is to put herself back in danger. But she also knows that soon she may have to do everything in her power to protect her country…

Jane Thynne is a remarkable author as rarely, if ever, have I read a series where each book is even better than the last and if, like me, you are fascinated by that period of history then you will thoroughly enjoy this series. She manages to vividly paint the picture of pre-war Germany and the complete fear and distrust that the Nazi regime instigated.  When I had finished this book I went onto Amazon and found that the next one in the series, Faith and Beauty, is out now in hardback and on Kindle, and in paperback in March so the feeling of remorse for the end of a book, that I normally get when I finish one that is so good, was quickly dissipated as the story of Clara Vine is continued.