Belle From Stella's Mum and Me Column Reveals Her Identity

You all know me as Annabel however I have another identity, Belle the BFF of Jane Gordon in the weekly Stella magazine column (Sunday Telegraph), Mum and Me. This is the column that details the lives of Bryony Gordon and her Mum, Jane. The ups and downs of mother/daughter relations, and also grandmother/granddaughter as Bryony and her husband, Harry, have a 5 year old daughter, Edie.

However when Jane moved to the country, in 2014, she and I met for the first time and became firm friends. Her sister-in-law, ‘Auntie Sue’, was worried that as Jane was a very definite ‘townee’ she might not make friends amongst the country, green wellie set so she needed to introduce her to someone who was not totally swaddled in green and tweed.

It was an unfortunate first meeting as Jane and Sue both came to tea and our garden was under water as I live on an eyot in the River Thames. The swans were waddling in and out of the house, seeking refuge and warmth to build a nest. However Jane was not overwhelmed, I think she found it mildly eccentric that I ignored the water and met her at the gate with a pair of wellies, thankfully not green, to traverse the river that was flowing freely between our entrance gate and the front door!!

Now 4 years on we have become joined at the hip and have shared many experiences – we are each others go-to-girl when an unusual invite comes our way. I have not attempted to train her in the conduct of country dwellers – I think she is unteachable – but I have tried to keep us both on trend, youthful and, in her case, to help find a man. During this time she launched, with her daughter, the column Mum and Me and she introduced her Sunday telegraph readers to her new BFF, Belle. 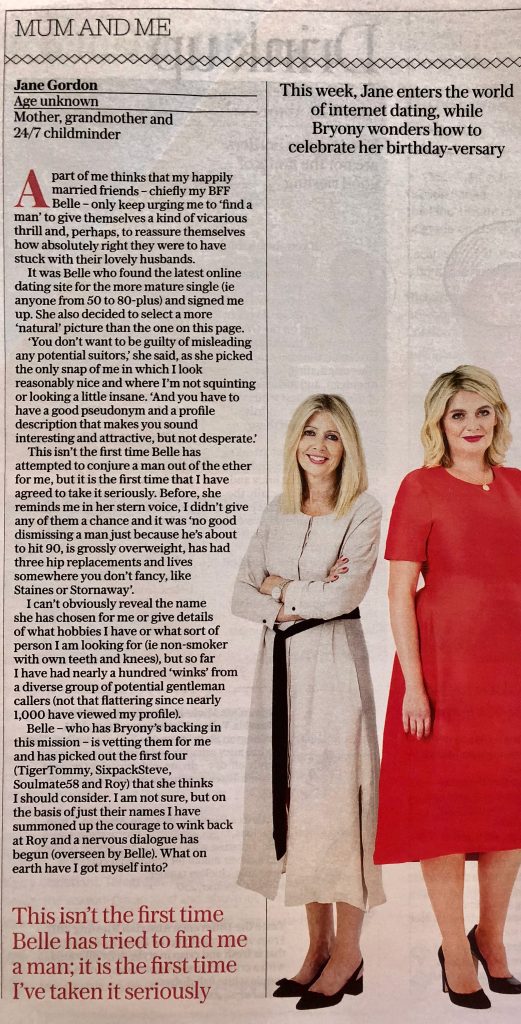 Belle and Jane have been on many jaunts, Burlesque dancing lessons in London – a disaster as neither of us have the bosoms or the ability to make our top half shimmer. The teacher kept shouting at us to connect with our inner Burlesque but to be honest it wasn’t there and never has been unless you count those nights, when at least 40 years younger, after a lot of alcohol, we found ourselves shaking our bootee on the dance floor. Alcohol could be responsible for most of our misspent youth!

Together we tried the Pokemon Go game, downloading the app, a task which was challenging in itself. However we met on a park bench and armed with our iPhones with newly downloaded apps we went in search of these illusive characters. The game was at its popularity peak which was an advantage as there were many creatures hanging around the edge of the River Thames. Yet, after about one hour, we could not catch a thing. We saw them on our screens but trying to pin them down and catch them involved some sort of co-ordinated swift movement with our arms. Well Burlesque had shown us that we had no co-ordination skills to speak of so feeling a little helpless we went in search of coffee. Happily we bumped into this totally divine young man and his girlfriend (sadly also stunning) who were both on the Pokemon Go hunt and they were at level 352 or something so grand that it was like a 5 year old talking to Roger Federer about the skills of tennis. Nevertheless he succumbed to our charms or more probably felt sorry for our complete lack of ability and gave us a one-to-one (or was it two) tuition for at least 15 minutes when he finally admitted defeat and left us. We felt completely weak and feeble. It may have been something to do with the fact that someone, as handsome as he, had been so physically close, even holding our hands to show us the ‘catch move’, so that this time it was our brains went to jelly and we could not focus our mind on matters at hand. Truthfully we are just useless and too long in the tooth for games that involve a brain and a harmonised body – our young tutor clearly had both of these assets in abundance!

Then more recently Jane engaged me to help her find a real man who is more age-appropriate than our Pokemon Prince. We decided that as we knew so few, if any, men that were single and available we should try our hand at internet dating sites. This time all our hands needed to do was type. If you have read Jane’s last hilarious column in Stella Magazine you will know what happened (see left)

Now you know that Belle or Annabel is her partner in crime……we continue to have fun together. It may be going to LIDL during Christmas week to find a wooden dolls house for Jane’s granddaughter, Edie, and coming out laden down with food and drink goodies, yards of Jaffa cakes and enough soap powder to wash the uniform of a whole regiment three times over, but all for a ridiculously small amount of money. Well it would have been small if we hadn’t found one of those celebrity chefs in the wine section who seemed to know what he was doing so we trustingly loaded our trolley with whatever he had. Still it was a very merry Christmas that year in both of our homes though I don’t think Edie ever got her dolls house. Stay tuned to Jane’s column as you will soon find out how her internet dating progresses as I think Belle may have persuaded her to test the waters with Magnum Mike!

Did you read our feature on Jane Gordon when she was our Woman of the Week – click HERE.