This Piedmont Peppers’ recipe is probably my all time favourite side dish. It makes a colourful and juicy addition to roast meat, fish, or indeed any meal that needs a sauce, gravy or a cheerful splash of red. I served these with crispy kale and baked cod loins last night. 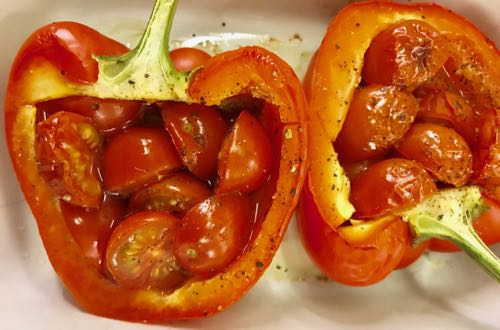 Ingredients serves 4 (but easily halved, doubled, trebled… well, you get it)
2 firm fresh red peppers
Tin anchovies
Clove garlic, sliced or chopped
Fresh tomatoes – I used cherry, cut in half. If you only have larger tomatoes, pop them into a pot of just boiled water, remove after a minute, the skins will then easily peel off. Cut into quarters.Remove seeds if preferred.

How to prepare
With a large sharp knife, cut each pepper into two, starting by slicing through the stem and then cutting the bulbous part in half. Remove white seeds.

Fill the cavity of each pepper with some garlic, a few anchovies and the tomatoes.

Pour some anchovy oil over each half. Don’t worry, it won’t taste fishy. Anchovies will melt away during cooking and give a real depth of flavour to this dish.

Put the pepper halves into a shallow dish and cook for 30 – 40 mins on 180 degrees. If they are slightly charred at the edges, all the better.